St George's Chapel at Windsor Castle in England is a chapel built in the late-medieval Perpendicular Gothic style. It is both a Royal Peculiar (a church under the direct jurisdiction of the monarch) and the Chapel of the Order of the Garter. It is located in the Lower Ward of the castle. St George's castle chapel was originally founded in the 14th century by King Edward III and extensively enlarged in the late 15th century. It has been the scene of many royal services, weddings and, particularly in the 19th and 20th centuries, burials. Although occasional monarchs and their consorts were buried at the castle from the 15th century it wasn't until the 19th century that St George's Chapel and the nearby Frogmore Gardens superseded Westminster Abbey as the chosen burial place for the British royal family. Windsor Castle is a principal residence of Queen Elizabeth II.

The running of the chapel is the responsibility of the dean and canons of Windsor who make up the College of St. George. They are assisted by a Clerk, Verger and other staff. The Society of the Friends of St George's and Descendants of the Knights of the Garter, a registered charity, was established in 1931 to assist the College in maintaining the chapel. 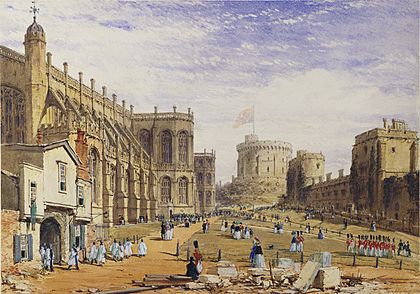 St George's Chapel (left) at Windsor Castle in 1848, showing the absence of the Queen's Beasts on the pinnacles (since replaced). Watercolour by Joseph Nash.

In 1348, King Edward III founded two religious colleges: St Stephen's at Westminster and St George's at Windsor. The new college at Windsor was attached to the Chapel of St Edward the Confessor which had been constructed by Henry III in the early thirteenth century. The chapel was then re-dedicated to the Blessed Virgin Mary, George the Martyr and Edward the Confessor, but soon became known only by its dedication to St George. Edward III also built the Aerary Porch in 1353–54. It was used as the entrance to the new college. 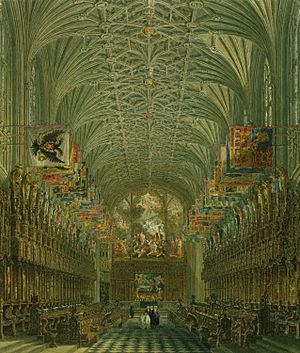 St George's Chapel became the church of the Order of the Garter. A special service is still held in the chapel every June and is attended by members of the order. Their heraldic banners hang above the upper stalls of the choir, where they have a seat for life. 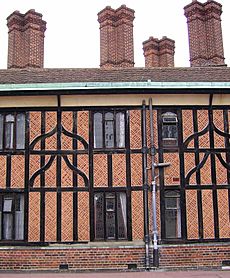 The period 1475–1528 saw a radical redevelopment of St George's Chapel set in motion by Edward IV and continued by Henry VII under the supervision of his most esteemed counsellor, Sir Reginald Bray and by Henry VIII. The thirteenth-century Chapel of St Edward the Confessor was enlarged into a cathedral-like space under the direction of Richard Beauchamp, Bishop of Salisbury, and the master mason, Henry Janyns. The Horseshoe Cloister was constructed for the new community of 45 junior members: 16 vicars, a deacon gospeller, 13 lay clerks, 2 clerk epistolers and 13 choristers. The Choir of St George's Chapel continues to this day and numbers 20. The choristers are boarders at St George's School, Windsor Castle. In term time they attend practice in the chapel every morning and sing Matins and the Eucharist on Sundays and Evensong throughout the week, except on Wednesdays.

St George's Chapel was a popular destination for pilgrims during the late medieval period, as it was considered to contain several important burials: the bodies of John Schorne and Henry VI and a fragment of the True Cross held in a reliquary called the Cross of Gneth. It was seized from the Welsh people by Edward II after his conquest along with other sacred relics. These relics all appear to have been displayed at the eastern end of the south choir.

The Chapel suffered a great deal of destruction during the English Civil War. Parliamentary forces broke into and plundered the chapel and treasury on 23 October 1642. Further pillage occurred in 1643 when the fifteenth-century chapter house was destroyed, lead was stripped off the chapel roofs, and elements of Henry VIII's unfinished funeral monument were stolen. Following his execution in 1649, Charles I was buried in a small vault in the centre of the choir at St George's Chapel, which also contained the coffins of Henry VIII and Queen Jane Seymour. A programme of repair was undertaken at St George's Chapel after the Restoration.

During his life and reign, King George III was responsible for reigniting royal interest in Windsor Castle, which had been much overlooked after the House of Hanover came to the throne of the United Kingdom in 1714. On 12 August 1776 the Royal Family first attended the Sunday morning service at St George's Chapel – which they called “the Cathedral”. George III was committed to St George's Chapel; he inspired and in large part funded an extensive restoration of the chapel from 1780 to 1790.

In the 21st century, St George's accommodates approximately 800 people for services and events.

St George's Chapel in the Lower Ward at centre right, behind tree 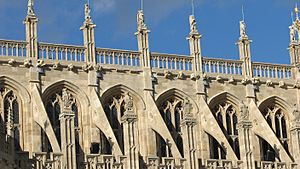 For more details, see Order of the Garter 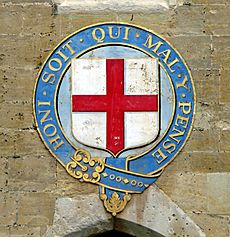 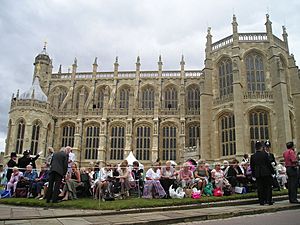 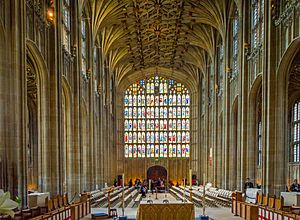 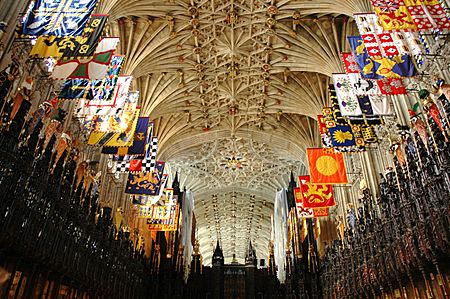 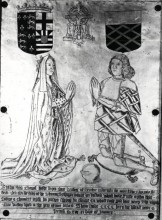 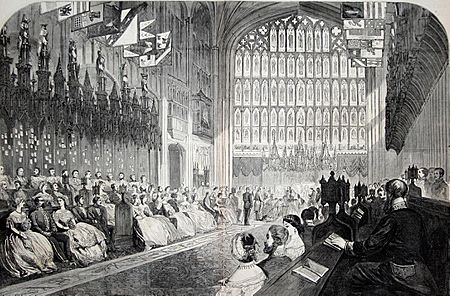