George was born in Copenhagen Castle. His father was Frederick III, King of Denmark and Norway. His mother was Sophie Amalie of Brunswick-Lüneburg.

Because George was Protestant, people thought he would be a good husband for Anne, Queen of Great Britain. She was just Lady Anne at the time. George and Anne were married on 28 July 1683. The wedding was in the Chapel Royal at St James's Palace, London. The guests included King Charles II, Queen Catherine, and the Duke and Duchess of York. 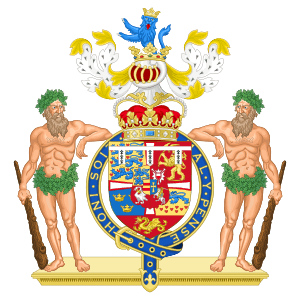 Coat of arms of Prince George, Duke of Cumberland, Knight of the Garter

The royal coat of arms of Denmark with a label of three points Argent, each with three Ermine points. The whole surmounted by a crown of a prince of Denmark. His crest was "out of a coronet Or, a demi-lion rampant guardant Azure, crowned of the first".

Queen Anne became pregnant seventeen times. Many of the pregnancies ended in stillbirth or miscarriage. None of the children lived past childhood.

All content from Kiddle encyclopedia articles (including the article images and facts) can be freely used under Attribution-ShareAlike license, unless stated otherwise. Cite this article:
Prince George of Denmark Facts for Kids. Kiddle Encyclopedia.