General John Churchill, 1st Duke of Marlborough, 1st Prince of Mindelheim, 1st Count of Nellenburg, Prince of the Holy Roman Empire was an English soldier and statesman whose career spanned the reigns of five monarchs. From a noble family, he served first as a page at the court of the House of Stuart under James, Duke of York, through the 1670s and early 1680s, earning military and political advancement through his courage and diplomatic skill.

Churchill's role in defeating the Monmouth Rebellion in 1685 helped secure James on the throne, yet just three years later he abandoned his Catholic patron for the Protestant Dutchman, William of Orange. Honoured for his services at William's coronation with the earldom of Marlborough, he served with further distinction in the early years of the Nine Years' War, but persistent charges of Jacobitism brought about his fall from office and temporary imprisonment in the Tower. It was not until the accession of Queen Anne in 1702 that Marlborough reached the peak of his powers and secured his fame and fortune.

His marriage to the hot-tempered Sarah Jennings – Anne's intimate friend – ensured Marlborough's rise, first to the Captain-Generalcy of British forces, then to a Dukedom. Becoming leader of Allied forces during the War of the Spanish Succession, his victories on the fields of Blenheim (1704), Ramillies (1706), Oudenarde (1708), and Malplaquet (1709), ensured his place in history as one of Europe's great generals.

His wife's stormy relationship with the Queen, and her dismissal from court, was central to his own fall. Incurring Anne's disfavour, and caught between Tory and Whig factions, Marlborough, who had brought glory and success to Anne's reign, was forced from office and went into self-imposed exile. He returned to England and to influence under the House of Hanover with the accession of George I to the British throne in 1714. 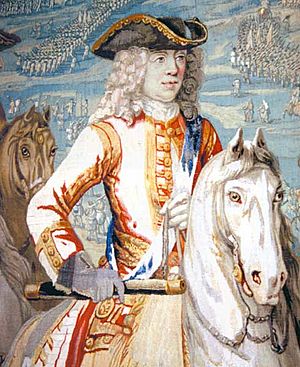 John Churchill at the Battle of Oudenaarde July 11, 1708

Marlborough's ambition made him the richest of all Anne's subjects. His family connections wove him into European politics. His leadership of the allied armies consolidated Britain's emergence as a front-rank power. He successfully maintained unity among the allies, thereby demonstrating his diplomatic skills.

Throughout ten consecutive campaigns during the Spanish Succession war, Marlborough held together a conflicting alliance through his sheer force of personality and raised the standing of British arms to a level not known since the Middle Ages. His victories allowed Britain to rise from a minor to a major power, ensuring the country's growing prosperity throughout the 18th century.

As an administrator Marlborough was also without peer; his attention to detail meant his troops rarely went short of supply – when his army arrived at its destination it was intact and in a fit state to fight. This concern for the welfare of the common soldier together with his ability to inspire trust and confidence, and his willingness to share the dangers of battle, often earned him admiration from his men – "The known world could not produce a man of more humanity", observed Corporal Matthew Bishop.

It was this range of abilities that makes Marlborough outstanding. Even his old adversaries recognised the Duke's qualities. His success was made possible because of his enormous reserves of stamina, willpower and self-discipline; his ability to hold together the Alliance against France, made possible by his victories, can hardly be overestimated.

While living at Windsor Lodge he suffered a stroke in June 1722, not long after his 72nd birthday. In the presence of his wife Sarah and two surviving daughters, the 1st Duke of Marlborough died. He was initially buried in the vault at the east end of Henry VII's chapel in Westminster Abbey, but following instructions left by Sarah, who died in 1744, Marlborough was moved to be by her side lying in the vault beneath the chapel at Blenheim.

All content from Kiddle encyclopedia articles (including the article images and facts) can be freely used under Attribution-ShareAlike license, unless stated otherwise. Cite this article:
John Churchill, 1st Duke of Marlborough Facts for Kids. Kiddle Encyclopedia.