Battle of Sedgemoor facts for kids

The Battle of Sedgemoor was the last and decisive engagement between the Kingdom of England and rebels led by the Duke of Monmouth during the Monmouth rebellion, fought on 6 July 1685, and took place at Westonzoyland near Bridgwater in Somerset, England, resulting in a victory for the English army.

It was the final battle of the Monmouth Rebellion and followed a series of skirmishes around south-west England between the rebel forces of the Duke of Monmouth, and the Royal Army still loyal to James II. Victory went to the Government and about 500 prisoners fell into their hands. Monmouth escaped from the battlefield but was captured, taken to London and executed nine days later. Many of Monmouth's supporters were tried during the Bloody Assizes. Many were transported abroad, while others were executed by drawing and quartering.

It was the final battle of the Monmouth Rebellion, by which the rebel James Scott, 1st Duke of Monmouth, attempted to seize the English throne from his uncle James II of England. James II had succeeded to the throne on the death of his brother Charles II on 2 February 1685; James Scott was Charles' illegitimate son.

After Monmouth landed from the Dutch Republic at Lyme Regis in Dorset, there had been a series of marches and skirmishes throughout Dorset and Somerset. Eventually Monmouth's poorly equipped army was pushed back to the Somerset Levels, becoming hemmed in at Bridgwater on 3 July. He ordered his troops to fortify the town. The force was made up of around 3,500, mostly nonconformist, artisans and farm workers armed with farm tools (such as pitchforks).

The royalist troops, led by Louis de Duras, 2nd Earl of Feversham, and Colonel John Churchill, were camped behind the Bussex Rhine at Westonzoyland. The infantry forces included 500 men of the 1st Regiment of Foot (the Royal Scots), known as Dumbarton's Regiment, under Lieutenant-Colonel Douglas; two battalions of the 1st or King's Royal Regiment of Guards (Grenadier Guards), respectively led by Henry FitzRoy, 1st Duke of Grafton and Major Eaton; 600 men of the Second Regiment of Guards (later the Coldstream Guards) under Lieutenant-Colonel Sackville; five companies of the Queen Dowager's or the Tangier Regiment (later 2nd Foot), known as "Kirke's Lambs"; and five companies of the Queen Consort's Regiment (Kings Own Royal Regiment), also known as Trelawny's Regiment, which was commanded by Lieutenant-Colonel Charles Churchill, Colonel John Churchill's younger brother. The Horse and Foot, the Royal Train of Artillery was camped along the road to Bridgwater. The Royal Cavalry, with seven troops of 420 men of the Earl of Oxford's, the Kings Regiment of Horse (Blues and Royals), led by Colonel Sir Francis Compton; the King's Own Royal Dragoons; and three troops of the King's Horse Guards (Lifeguards) made up the army.

The Duke eventually led his untrained and ill-equipped troops out of Bridgwater at around 10:00 pm to undertake a night-time attack on the King's army. They were guided by Richard Godfrey, the servant of a local farmer, along the old Bristol road towards Bawdrip. With their limited cavalry in the vanguard, they turned south along Bradney Lane and Marsh Lane, and came to the open moor with its deep and dangerous rhynes. 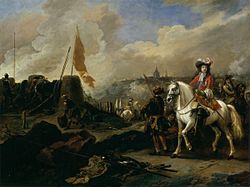 There was a delay while the rhyne was crossed and the first men across startled a royalist patrol. A shot was fired and a horseman from the patrol galloped off to report to Feversham. Lord Grey of Warke led the rebel cavalry forward and they were engaged by the King's Regiment of Horse which alerted the rest of the royalist forces. The superior training of the regular army and their horses enabled them to rout the rebel forces by outflanking them. 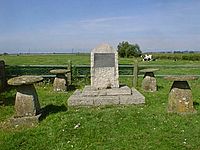 A memorial to the battle.

Monmouth escaped from the battlefield with Grey and they headed for the south coast disguised as peasants. They were captured near Ringwood, Hampshire. Monmouth was taken to the Tower of London, where he was executed.

A letter written by the Earl of Shaftesbury in 1787 provides more detail as to Monmouth's capture:

The tradition of the neighbourhood is this: viz. That after the defeat of the Duke of Monmouth at Sedgemoor, near Bridgewater, he rode, accompanied by Lord Grey, to Woodyates, where they quitted their horses; and the Duke having changed clothes with a peasant, endeavoured to make his way across the country to Christchurch. Being closely pursued, he made for the Island, and concealed himself in a ditch which was overgrown with fern and underwood. When his pursuers came up, an old woman gave information of his being in the Island, and of her having seen him filling his pocket with peas. The Island was immediately surrounded by soldiers, who passed the night there, and threatened to fire the neighbouring cotts. As they were going away, one of them espied the skirt of the Duke's coat, and seized him. The soldier no sooner knew him, than he burst into tears, and reproached himself for the unhappy discovery. The Duke when taken was quite exhausted with fatigue and hunger, having had no food since the battle but the peas which he had gathered in the field. The ash tree is still standing under which the Duke was apprehended, and is marked with the initials of many of his friends who afterwards visited the spot.

The family of the woman who betrayed him were ever after holden in the greatest detestation, and are said to have fallen into decay, and to have never thriven afterwards. The house where she lived, which overlooked the spot, has since fallen down. It was with the greatest difficulty that any one could be made to inhabit it.

After the battle, about 500 of Monmouth's troops were captured and imprisoned in St Mary's Parish Church in Westonzoyland, while others were hunted and shot in the ditches where they were hiding. More were hanged from gibbets erected along the roadside. The royalist troops were rewarded, with Feversham being made a Knight of the Garter, Churchill promoted to Major-General and Henry Shires of the artillery receiving a Knighthood. Other soldiers, particularly those that had been wounded, received allowances ranging from £5 to £80. Some of the wounded were among the first to be treated at the newly opened Royal Hospital Chelsea.

The king sent Lord Chief Justice Jeffreys to round up the Duke's supporters throughout the south-west and try them in the Bloody Assizes at Taunton Castle and elsewhere. About 1,300 people were found guilty, many being transported abroad, while some were executed by drawing and quartering. Daniel Defoe, who would later write the novel Robinson Crusoe, had taken part in the uprising and battle. He was heavily fined by Jeffreys, losing much of his land and wealth. Two brothers Benjamin Hewling, a commander of a troop of horse, and William Hewling, lieutenant of foot, were among those condemned to death. Benjamin Hewling was hanged rather than drawn and quartered following a payment of £1000 by his sister.

James II was overthrown in a coup d'état three years later, in the Glorious Revolution.

The Battle of Sedgemoor is often referred to as the last battle fought on English soil, but this depends on the definition of 'battle', for which there are different interpretations. Other contenders for the title of last English battle include: the Battle of Preston in Lancashire, which was fought on 14 November 1715, during the First Jacobite Rebellion; the Second Jacobite Rebellion's Clifton Moor Skirmish, near Penrith, Cumberland, on 18 December 1745. The Battle of Culloden fought on Drumossie Moor to the north east of Inverness on 16 April 1746 was the last pitched battle fought on British soil.

All content from Kiddle encyclopedia articles (including the article images and facts) can be freely used under Attribution-ShareAlike license, unless stated otherwise. Cite this article:
Battle of Sedgemoor Facts for Kids. Kiddle Encyclopedia.