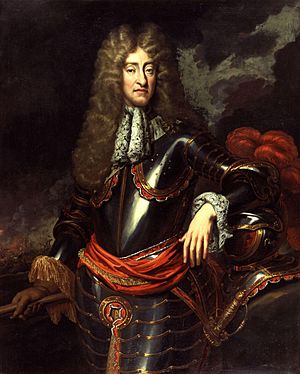 The name of the movement derives from deposed Stuart monarch, James II and VII

Jacobitism was the political movement dedicated to the restoration of the Stuart kings to the thrones of England and Scotland (and after 1707, the United Kingdom). It was so named after James VI of Scotland and I of England whose name in Latin is Iacobus Rex.

Jacobitism was a response to the deposition of James VII and II in 1688 when he was replaced by his daughter Mary II jointly with her husband William of Orange. The Stuarts lived on the European continent after that, occasionally attempting to regain the throne with the aid of France or Spain.

Royalists supported Jacobitism because they believed that Parliament had no authority to interfere with the Royal succession, and many Catholics looked to it for relief from Protestant oppression, but people became involved in the military campaigns for all sorts of allegiances and motives. In Scotland the Jacobite cause became entangled in the last throes of the warrior Clan system, and became a lasting romantic memory.

The emblem of the Jacobites is the white rose; white rose day is celebrated on June 10, the anniversary of the birth of James VIII and III in 1688.

All content from Kiddle encyclopedia articles (including the article images and facts) can be freely used under Attribution-ShareAlike license, unless stated otherwise. Cite this article:
Jacobitism Facts for Kids. Kiddle Encyclopedia.