Order of the Garter facts for kids 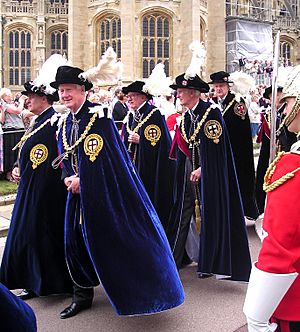 The Most Noble Order of the Garter is an English order of chivalry. It was started in 1348, by King Edward III of England. The Order is the highest level of knighthood that can be given by the English monarch. It is the world's oldest national order of knighthood. Membership in the Order is limited to those people who have done many great things for the United Kingdom.

All content from Kiddle encyclopedia articles (including the article images and facts) can be freely used under Attribution-ShareAlike license, unless stated otherwise. Cite this article:
Order of the Garter Facts for Kids. Kiddle Encyclopedia.