Kids Encyclopedia Facts
This page is about village and civil parish in Worcestershire. For the town in Tasmania, Australia, see Hagley, Tasmania.

The parish of Hagley used to consist of Hagley, West Hagley and Blakedown. The main focus of the village was Hagley where Hagley Hall and the parish church of St John the Baptist (with its origins in Anglo-Saxon times) reside. In 1868 the Earl of Dudley defrayed one third of the cost of the tower and spire by George Edmund Street added to the church.

Lower Hagley started to expand with the arrival of the railway in 1852 and the building of a proper station and its iconic GWR footbridge (completed in 1884). The expansion of Lower Hagley (now known as West Hagley) initiated a shift in the focus of the village. This was recognised in 1906 with the building of a subsidiary parish church in Lower Hagley dedicated to St Saviour. and today West Hagley contains the shopping area and the schools. The precise dividing line between the two areas is undefined and is therefore debatable. Nevertheless, both settlements lie within the parish of Hagley.

The parish register of Hagley is the oldest in England. It dates from 1 December 1538, being the year in which registers were ordered to be kept in all parishes.

Hagley is part of the West Midlands Urban Area as defined by the Office for National Statistics, and is joined to Stourbridge and the Black Country by the A491 and B4187; The village lies at the foot of the Clent Hills, and is served by its own railway station on the Kidderminster to Birmingham line.

It is situated on the A456 Birmingham to Kidderminster road, which is known as the Hagley Road in Birmingham, because it was once administered by a turnpike trust, whose responsibilities ended at the former boundary of the parish (now in Blakedown).

Despite having a population larger than some market towns (such as Tenbury Wells) and once having its own cattle market, Hagley lacks the essential characteristics of a market town. While it has a shopping street and many local services, it is a fundamentally unbalanced community economically, in that there is little local employment (other than in local services). However, unemployment is low, because of the ease of commuting to work. Accordingly, Hagley is essentially a dormitory village for Birmingham or the adjacent Black Country. 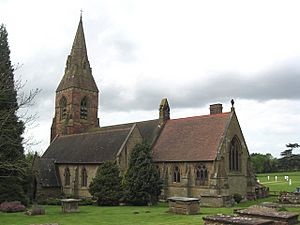 Hagley is known for 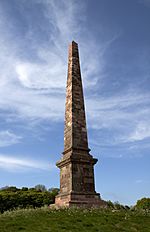 Hagley Monument after its restoration in 2010

The parish register of Hagley is the oldest in England. It dates from 1 December 1538, being the year in which registers were ordered to be kept in all parishes.

All content from Kiddle encyclopedia articles (including the article images and facts) can be freely used under Attribution-ShareAlike license, unless stated otherwise. Cite this article:
Hagley Facts for Kids. Kiddle Encyclopedia.