Kidderminster is a large town and civil parish in the Wyre Forest district of Worcestershire, England. It is located approximately 17 miles (27 km) south-west of Birmingham city centre and approximately 15 miles (24 km) north of Worcester city centre. The 2011 census recorded a population of 55,530 in the town. The town is twinned with Husum, Germany and it forms the majority of the Wyre Forest Conurbation, an urban area of 99,000.

The land around Kidderminster may have been first populated by the Husmerae, an Anglo-Saxon tribe first mentioned in the Ismere Diploma, a document in which Ethelbald of Mercia granted a "parcel of land of ten hides" to Cyneberht. This became the settlement of Stour-in-Usmere, which was later the subject of a territorial dispute settled by Offa of Mercia in 781, where he restored certain rights to Bishop Heathored. This allowed for the creation of a monastery or minstre in the area, and the earliest written form of the name Kidderminster (Chedeminstre) was not seen until it appeared in the Domesday Book of 1086. It was a large manor held by William I with 16 outlying settlements (Bristitune, Fastochesfeld, Franche, Habberley, Hurcott, Mitton, Oldington, Ribbesford, Sudwale, Sutton, Teulesberge, Trimpley, Wannerton and Wribbenhall). Various spellings were in use – Kedeleministre or Kideministre (in the 12th and 13th centuries), Kidereministre (13th–15th centuries) – until the name of the town was settled as Kidderminster by the 16th century. Between 1156 and 1162 Henry II granted the manor to his steward, Manasser Biset, and as the settlement grew a fair (1228) and later a market (1240) were established there. In a visit to the town sometime around 1540, King's Antiquary John Leland noted that Kidderminster "standeth most by clothing". King Charles I granted the Borough of Kidderminster a Charter in 1636. the original charter can be viewed at Kidderminster Town Hall 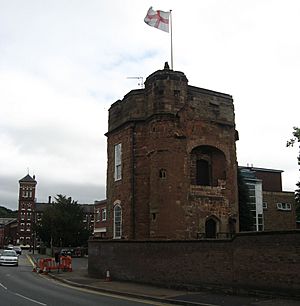 A parliamentary report of 1777 listed Kidderminster Borough as having a parish workhouse accommodating up to 70 inmates. Under the so-called Gilbert's Act of 1782 Kidderminster Union was established for the purpose of relieving the indigent poor.

Kidderminster has two Commissioners' churches. The first was St. George's church, on Radford Avenue. This was designed by Francis Goodwin and built in 1821–1824, finally being consecrated in April 1824. It had the third largest grant by the Commission, of just over £17,000.00, of any church outside London. The second church was St. John's Church, on the Bewdley Road. This church was built in 1843 and the architect was Matthew Steele, although the grant in this case was just over £4,000. To the south by the River Stour, dating from the 15th century, is a single surviving tower of Caldwall (or Caldwell) Castle, a fortified manor house.

The River Stour and the Staffordshire and Worcestershire Canal both flow through Kidderminster town centre.

The town is noted for its particularly high record lows. Despite an average July low of 11.7 °C, the temperature has never fallen below 5 °C in that month. The coldest and warmest July nights were both recorded in 2015. 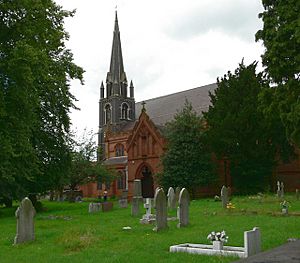 St John the Baptist's Church (Church of England), built in 1843

In the 1968 Buildings of England volume on Worcestershire, Pevsner described the town as; "uncommonly devoid of visual pleasure and architectural interest." In the 2007 revision, Alan Brooks goes toward a reassessment, writing; "the 19th century mill buildings, together with the churches, provide most of the architectural interest in a town otherwise uncommonly lacking in visual pleasures."

Two railway stations in the town share the same approach road and are located less than fifty metres apart. The main Network Rail station operated by London Midland is Kidderminster, from where trains run to Birmingham, Worcester and London. The other station, Kidderminster Town, is the terminus of the preserved Heritage Railway line, Severn Valley Railway from where trains run to Bridgnorth.

Several major routes run through the town including the A456 which runs from Birmingham to Woofferton, Shropshire, a few miles south of Woofferton, the A451 which runs from Stourbridge to Abberley, the A442 which runs from Droitwich to Hodnet, Shropshire, a few miles north of Telford, the A449 which runs from Newport in south Wales to Stafford and crosses the A456 at the Land Oak, and the A448 road which starts in the town and goes to Bromsgrove. A major change in the town centre road infrastructure was the construction of the ring road in the 1970s and 1980s, which relieved the town's growing congestion problem. Unusually, the final phase of the ring road was never completed which results in it having a ring road that does not form a complete ring.

The Staffordshire and Worcestershire Canal passes through the town.

There are direct bus links with towns including Worcester, Halesowen, Bewdley, Stourport, Bridgnorth, Bromsgrove and Redditch. The majority of the services in Kidderminster are operated by Diamond Bus (previously First Midland Red), while the rest is operated by R&B Travel, Central Buses & Coniston Coaches.

All content from Kiddle encyclopedia articles (including the article images and facts) can be freely used under Attribution-ShareAlike license, unless stated otherwise. Cite this article:
Kidderminster Facts for Kids. Kiddle Encyclopedia.