Stourport-on-Severn, often shortened to Stourport, is a town and civil parish in the Wyre Forest District of North Worcestershire, England, a few miles to the south of Kidderminster and down stream on the River Severn from Bewdley. Stourport lies on the River Severn, and at the time of the 2011 census had a population of 20,292. 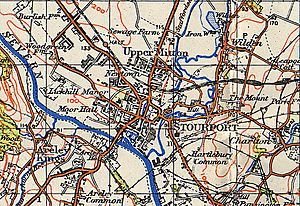 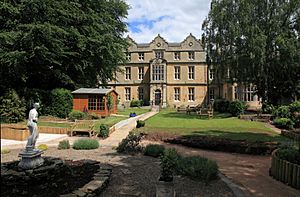 Stourport came into being around the canal basins at the Severn terminus of the Staffordshire and Worcestershire Canal, which was completed in 1768. In 1772 the junction between the Staffordshire and Worcestershire and the Birmingham Canal was completed and Stourport became one of the principal distributing centres for goods to and from the rest of the West Midlands. The canal terminus was built on meadowland to the south west of the hamlet of Lower Mitton. The terminus was first called Stourmouth and then Newport, the final name of Stourport was settled on by 1771.

The population of Stourport rose from about 12 in the 1760s to 1300 in 1795. In 1771 John Wesley had called Stourport a "well built village" but by 1788 he noted that "where twenty years ago there was but one house; now there are two or three streets, and as trade increases it will probably grow into a considerable town". In 1790 he found the town "twice as large as two years ago".

With the completion of the Worcester and Birmingham Canal in 1816, the revenue of the Staffordshire and Worcestershire Canal plunged sharply and from 1812 the population of Stourport scarcely rose, with many male workers leaving the town. 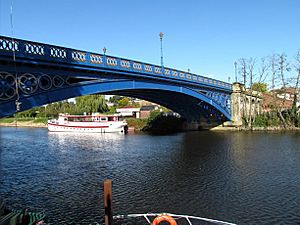 In 1870 the Cast Iron Stourport Road Bridge across the Severn was built. It currently carries the A451 road and was refurbished in 2007

In the area close to Stourport there are several large manor and country houses, among which Witley Court, Astley Hall, Pool House, Areley Hall, Hartlebury and Abberley Hall (with its clock tower) are particularly significant. Hartlebury was the residence of the Bishops of Worcester from the early 13th century until 2007, and Astley Hall was the home of Prime Minister Stanley Baldwin, who died here in 1947.

In 1968 the Transport Act designated the canal a "Cruise way” for pleasure purposes.

In 1944, this was the location of a famous address to the troops, by USA General George S. Patton.

The George Gilbert Scott church replaced an earlier brick church of 1782 by James Rose. This building was never finished, and after suffering storm damage, had to be partly demolished. The current St. Michael's church sits partially within its ruins. The Font was salvaged from the ruins of the old church, and is still used in the current building.

All content from Kiddle encyclopedia articles (including the article images and facts) can be freely used under Attribution-ShareAlike license, unless stated otherwise. Cite this article:
Stourport-on-Severn Facts for Kids. Kiddle Encyclopedia.