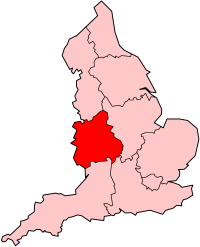 The West Midlands is an official Region of England, covering the western half of the Midlands.

The official region contains the large conurbation that includes Birmingham and Wolverhampton and includes also the mainly rural shire counties of Herefordshire, Shropshire, Staffordshire, Warwickshire and Worcestershire. (Unofficially the West Midlands region also spreads as far as Cheshire, Gloucestershire and Oxfordshire, but these are not part of the official region.)

There is some confusion in the use of the term "West Midlands", as the name is also used for the much smaller West Midlands county, and is still used by various organisations within that area such as West Midlands Police and West Midlands Fire Service.

The highest point in the region is Black Mountain, at 703 metres.

Major towns and cities in the West Midlands region include:

The official representative body of the region is the West Midlands Regional Assembly which has limited administrative functions such as regional planning and economic development. The assembly is not an elected body, but is made up of members appointed from local councils across the region, and members from regional interest groups such as business and environmental groups and trade unions.

The official region consists of the following subdivisions:

Key: shire county = † | metropolitan county = == Economy == Coal mining used to be the main industry of the Black Country. Nationally famous companies in the West Midlands are Cadbury's in Bournville, Birmingham; the brewing companies such as Coors Brewers in Burton on Trent, as well as Marmite; JCB is based in Staffordshire.

All content from Kiddle encyclopedia articles (including the article images and facts) can be freely used under Attribution-ShareAlike license, unless stated otherwise. Cite this article:
West Midlands (region) Facts for Kids. Kiddle Encyclopedia.