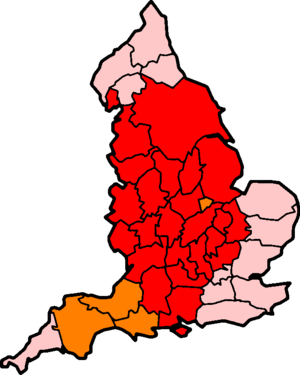 A shire is an administrative area of Great Britain (also county) and Australia. It is a kind of local government.

The first shires were created by the Anglo-Saxons in central and southern England. Shires were controlled by a royal official known as a "shire reeve" or sheriff. In modern English usage shires are sub-divided into districts.

In England and Wales, the term "shire county" is used to refer to counties which are not metropolitan counties.

It can also be used in a narrower sense, referring only to traditional counties ending in "shire". These counties are typically (though not always) named after their county town.

Of these, all but Huntingdonshire and Yorkshire are also administrative counties (but with different boundaries). Huntingdonshire is now administered as a district of Cambridgeshire, and Yorkshire is split between East, North, South and West Yorkshire, Greater Manchester, Lancashire, Cumbria and County Durham.

In Wales, the counties of Merioneth and Glamorgan are occasionally referred to with the "shire" suffix. The only traditional Welsh county that never takes "shire" is Anglesey.

Shire is the most common word in Australia for the smallest local government areas by population. The states of New South Wales, Victoria, Queensland and Western Australia use shire for this unit. South Australia and Tasmania use district. A shire has the same powers as the next largest units, the town and city. In NSW, the expression 'The Shire' commonly refers to the Sutherland shire.

All content from Kiddle encyclopedia articles (including the article images and facts) can be freely used under Attribution-ShareAlike license, unless stated otherwise. Cite this article:
Shire Facts for Kids. Kiddle Encyclopedia.