The county has a population of just under 1 million with over half the population living in Leicester's built-up area.

Leicestershire was recorded in the Domesday Book in four wapentakes: Guthlaxton, Framland, Goscote and Gartree. These later became hundreds, with the division of Goscote into West Goscote and East Goscote, and the addition of Sparkenhoe hundred. In 1087, the first recorded use of the name was as Laegrecastrescir.

Leicestershire's external boundaries have changed little since the Domesday Survey. The Measham-Donisthorpe exclave of Derbyshire has been exchanged for the Netherseal area, and the urban expansion of Market Harborough has caused Little Bowden, previously in Northamptonshire to be annexed.

In 1974, the Local Government Act 1972 abolished the county borough status of Leicester city and the county status of neighbouring Rutland, converting both to administrative districts of Leicestershire. These actions were reversed on 1 April 1997, when Rutland and the City of Leicester became unitary authorities. Rutland became a distinct Ceremonial County once again, although it continues to be policed by Leicestershire Constabulary.

The symbol of the county council, Leicestershire County Cricket Club and Leicester City FC, is the fox. Leicestershire is considered to be the birthplace of fox hunting as it is known today. Hugo Meynell, who lived in Quorn, is known as the father of fox hunting. Melton Mowbray and Market Harborough have associations with fox hunting, as has neighbouring Rutland.

The River Soar rises to the east of Hinckley, in the far south of the county, and flows northward through Leicester before emptying into the River Trent at the point where Derbyshire, Leicestershire, and Nottinghamshire meet. A large part of the north-west of the county, around Coalville, forms part of the new National Forest area extending into Derbyshire and Staffordshire. The highest point of the county is Bardon Hill at 278 metres (912 ft), which is also a Marilyn. The lowest point is about 24.8m, north of Bottesford where the River Devon leaves Leicestershire and enters Nottinghamshire.

The population of Leicestershire (excluding Leicester Unitary Authority) is 609,578 people (2001 census). The county covers an area of 2,084 km2 (804 sq mi). Its largest population centre is the city of Leicester, followed by the town of Loughborough. Other large towns include Ashby-de-la-Zouch, Coalville, Hinckley, Market Harborough, Melton Mowbray, Oadby, Wigston and Lutterworth.

Some of the larger of villages are:Burbage (population estimated around 16,500 2014) Birstall (population 11,400 in 2004), Broughton Astley, Castle Donington, Kibworth Beauchamp (along with Kibworth Harcourt), Great Glen, Ibstock, Countesthorpe and Kegworth. One of the most rapidly expanding villages is Anstey, which has recently seen a large number of development schemes.

The full range of music is performed in the county, from early medieval, European and Asian classical music, folk, jazz, blues, rock, and pop. The major Download Festival, a hard rock and metal festival, is hosted at Donington Park. 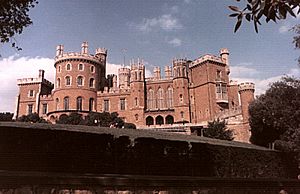 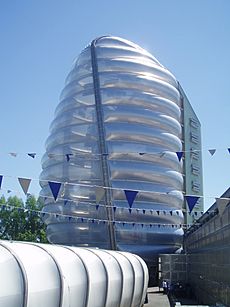 The National Space Centre in Leicester

All content from Kiddle encyclopedia articles (including the article images and facts) can be freely used under Attribution-ShareAlike license, unless stated otherwise. Cite this article:
Leicestershire Facts for Kids. Kiddle Encyclopedia.