The National Forest is an environmental project in central England run by The National Forest Company. From the 1990s, 200 square miles (520 km2) of north Leicestershire, south Derbyshire and southeast Staffordshire have been planted in an attempt to blend ancient woodland with newly planted areas to create a new national forest. It stretches from the western outskirts of Leicester in the east to Burton upon Trent in the west, and is planned to link the ancient forests of Needwood and Charnwood. 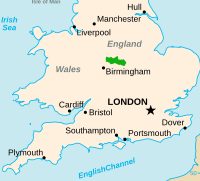 Location of the national forest.

The National Forest Company is a not-for-profit organisation established in April 1995 as a company limited by guarantee. It is supported by the Department for Environment, Food and Rural Affairs (DEFRA), with the aim of converting one third of the land within the boundaries of the National Forest (135 km2, 33,000 acres) to woodland, by encouraging landowners to alter their land use. It is described as "a forest in the making" and it is hoped to increase tourism and forestry-related jobs in the area.

Around 8 million trees have been planted, tripling the woodland cover from 6% to around 18%.

Approximately 85% of the trees planted are native broadleaf species. Some of the most commonly planted species are: English oak, ash, poplar, Corsican pine and Scots pine.

The transformation of the landscape is beginning to take effect as the first tiny whips planted in the early 1990s are growing into substantial trees. 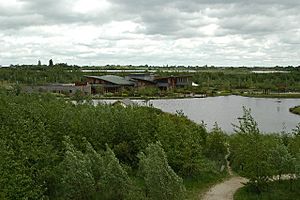 At the centre of the National Forest, is Conkers, a visitor centre located just outside the village of Moira, Leicestershire. There is also a visitor centre with wildlife walks and playgrounds at Rosliston.

As well as Ashby de la Zouch, the towns of Burton upon Trent, Swadlincote and Coalville are also located within the forest area.

All content from Kiddle encyclopedia articles (including the article images and facts) can be freely used under Attribution-ShareAlike license, unless stated otherwise. Cite this article:
The National Forest (England) Facts for Kids. Kiddle Encyclopedia.