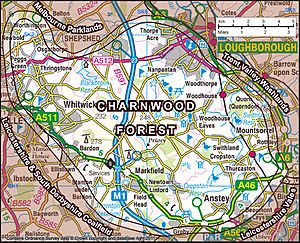 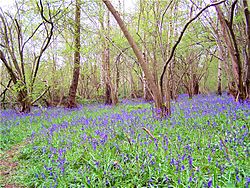 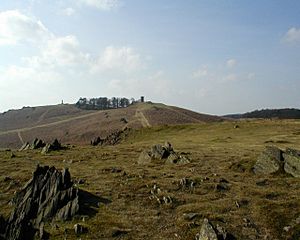 Charnwood Forest is an area in north-western Leicestershire, England, near Leicester, Loughborough, and Coalville.

Although called a forest, it is extremely varied, with many different areas. It has 45 sites of geological or wildlife interest. Above all, it is the only site in Europe where the Ediacaran fossil Charnia is found.

The area has some extensive tracts of woodland. It is undulating, rocky and picturesque, with barren areas. It is generally 600 ft (180 m) and upwards. On its western side is an abandoned coalfield, with Coalville and other former mining villages. This is now being regenerated and replanted as part of the National Forest. The M1 motorway cuts through Charnwood Forest.

The hard stone of Charnwood Forest has been quarried for centuries, and was a source of grind-stones. The granite quarries are of national importance and supply crushed stone ("aggregate") to much of southern Britain.

The Forest is an important recreational area with woodland walks, noted for their displays of bluebells in the early spring. Rockclimbing and walking are popular.

All content from Kiddle encyclopedia articles (including the article images and facts) can be freely used under Attribution-ShareAlike license, unless stated otherwise. Cite this article:
Charnwood Forest Facts for Kids. Kiddle Encyclopedia.