Charnia is the genus name of a frond-like Ediacaran lifeform. It has segmented ridges branching alternately to the right and left from a midline. The genus Charnia was named after Charnwood Forest in Leicestershire, England, where the first fossilised specimen was found.

Charnia is a highly significant fossil for several reasons. It is the first fossil ever described from undoubted Precambrian rocks. Until then the Precambrian was thought to have no fossils. Similar fossils found in the 1930s (Namibia) and the 1940s (Australia) but were thought to be of Cambrian age.

Secondly, Charnia has become an enduring image of Precambrian animals. Originally interpreted as an alga (Ford), it was recast as a sea pen, a sister group to the modern soft corals, from 1966 onwards (Glaessner). The sea pen interpretation has recently been discredited. The current "state of the art" is something of a "statement of ignorance".

Little is known of the ecology of Charnia. It was benthic, anchored to the sea floor. It probably lived in deep waters, below the waves (perhaps a great deal below the wave base). This means it did not photosynthesise. Further, it has no obvious feeding apparatus (mouth, gut, etc.) and so its lifestyle is somewhat of an enigma. Some think it survived by filter feeding or directly absorbing nutrients.

Charnia is, in time and geography, the most widespread Ediacaran fossil. The greatest abundance of specimens, which are also the oldest reliably dated Ediacaran fossils, are found at Mistaken Point on Newfoundland. 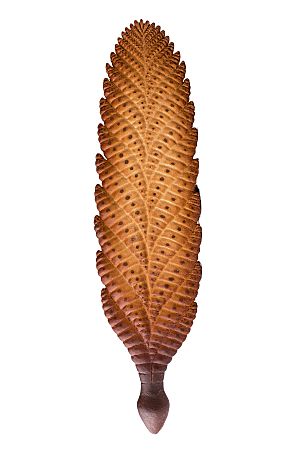 Reconstruction of Charnia masoni at MUSE - Science Museum in Trento

Charnia masoni was found by Roger Mason, a schoolboy who later became a professor of metamorphic petrology, in 1957. Tina Negus, a 15 year old schoolgirl at the time, had seen this fossil a year previously, but her geography schoolteacher flatly denied the possibility of Precambrian fossils.

Charnia wardi, later discovered in 1978 in southeast Newfoundland, was first described in 2003. This is the longest surviving Ediacaran age fossil, lasting over 2 million years. The holotype is a fragmentary specimen with a C. masoni like structure. It was defined as a new species on the basis of long and narrow shape.

Charnia antecedens has more irregular and higher angles of branching than C. masoni.

A number of Ediacaran form taxa are thought to represent Charnia (or Charniodiscus) at varying levels of decay.

All content from Kiddle encyclopedia articles (including the article images and facts) can be freely used under Attribution-ShareAlike license, unless stated otherwise. Cite this article:
Charnia Facts for Kids. Kiddle Encyclopedia.