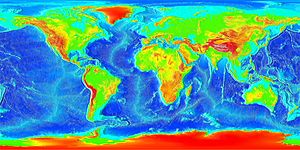 The seabed (also known as the seafloor, sea floor, or ocean floor) is the bottom of the ocean. 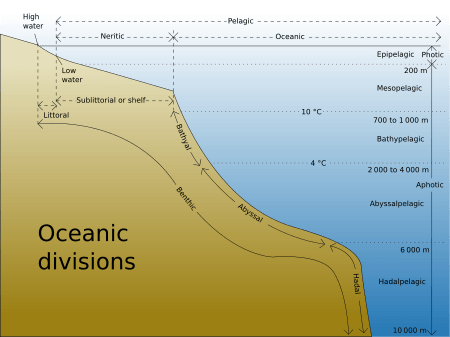 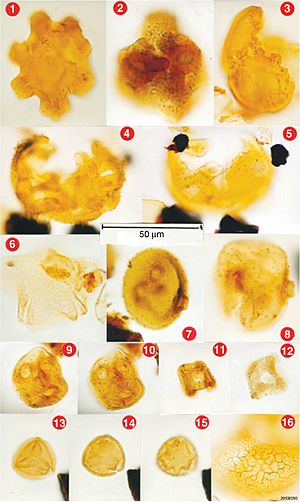 The mid-ocean ridge, as its name implies, is a mountainous rise through the middle of all the oceans, between the continents. Typically a rift runs along the edge of this ridge. Along tectonic plate edges there are typically oceanic trenches – deep valleys, created by the mantle circulation movement from the mid-ocean mountain ridge to the oceanic trench.

Hotspot volcanic island ridges are created by volcanic activity, erupting periodically, as the tectonic plates pass over a hotspot. In areas with volcanic activity and in the oceanic trenches there are hydrothermal vents – releasing high pressure and extremely hot water and chemicals into the typically freezing water around it.

Deep ocean water is divided into layers or zones, each with typical features of salinity, pressure, temperature and marine life, according to their depth. Lying along the top of the abyssal plain is the abyssal zone, whose lower boundary lies at about 6,000 m (20,000 ft). The hadal zone – which includes the oceanic trenches, lies between 6,000–11,000 metres (20,000–36,000 ft) and is the deepest oceanic zone.

All content from Kiddle encyclopedia articles (including the article images and facts) can be freely used under Attribution-ShareAlike license, unless stated otherwise. Cite this article:
Seabed Facts for Kids. Kiddle Encyclopedia.