Spreading at a mid-ocean ridge 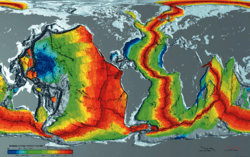 Age of oceanic crust: youngest (red) is along spreading centres 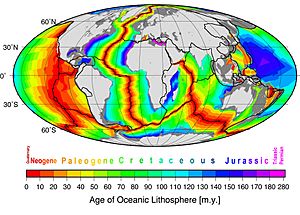 Age of oceanic lithosphere; youngest (red) is along spreading centers.

Seafloor spreading happens at the bottom of an ocean as tectonic plates move apart. The seafloor moves and carries continents with it. At ridges in the middle of oceans, new oceanic crust is created.

At the Mid-Atlantic Ridge (and other places), material from the upper mantle rises through the faults between oceanic plates. It forms new crust as the plates move away from each other. The new crust then slowly moves away from the ridge. Seafloor spreading helps explain continental drift in plate tectonics.

Earlier theories (e.g. by Alfred Wegener) of continental drift were that continents 'plowed' through the ocean. The modern idea is that the ocean floor itself moves and carries the continents with it as it expands from a mid-ocean ridge. Today, it is accepted. The phenomenon is caused by convection in the weak upper mantle, or asthenosphere.

Mid-ocean ridges are geologically active, with new magma constantly emerging onto the ocean floor and into the crust at and near rifts along the ridge axes. The crystallized magma forms new crust of basalt and gabbro.

The rocks making up the crust below the sea floor are youngest at the axis of the ridge and age with increasing distance from that axis. New magma of basalt composition emerges at and near the axis because of decompression melting in the underlying Earth's mantle.

The oceanic crust is made up of rocks much younger than the Earth itself: oceanic crust in the ocean basins is everywhere less than 200 million years old. The crust is in a constant state of 'renewal' at the ocean ridges. Moving away from the mid-ocean ridge, ocean depth progressively increases; the greatest depths are in ocean trenches. As the oceanic crust moves away from the ridge axis, the peridotite in the underlying mantle cools and becomes more rigid. The crust and the relatively rigid peridotite below it make up the oceanic lithosphere.

Slow spreading ridges like the Mid-Atlantic Ridge have large, wide rift valleys, sometimes as big as 10-20 km wide and very rugged terrain at the ridge crest. By contrast, fast spreading ridges like the East Pacific Rise are narrow, sharp incisions surrounded by generally flat topography that slopes away from the ridge over many hundreds of miles.

All content from Kiddle encyclopedia articles (including the article images and facts) can be freely used under Attribution-ShareAlike license, unless stated otherwise. Cite this article:
Seafloor spreading Facts for Kids. Kiddle Encyclopedia.