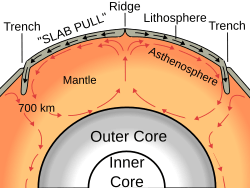 Oceanic crust is formed at mid-ocean ridges; the lithosphere is subducted back into the asthenosphere at trenches

Ocean trenches are typically caused when an oceanic crustal plate slides under a lighter continental plate or another oceanic plate. It is believed to work by density. Where one plate slides under another, this is called subduction. As the heavier plate descends, the long, narrow feature caused is called the "subduction zone". It is here that oceanic trenches form. They can be 1,500 miles (2,400 km) long, several miles deep, and as much as 70 miles (112 km) wide.

At least five trenches are over 6 miles (10 km) deep. The greatest ocean depth to be sounded is in the Challenger Deep of the Mariana Trench, at a depth of 11,034 m (36,201 ft) below sea level. Oceanic lithosphere moves into trenches at a global rate of about 3 km2/yr.

Trenches are active with earthquakes and resulting tsunamis. Most volcanism associated with trenches occurs on the continent and not on the sea floor. However, many of the ocean's volcanic islands and seamounts are found in what are called island arcs, bending chains of islands rising from the sea floor, usually paralleling the concave edges of an oceanic trench. The western Pacific has island arcism as do the Aleutian Islands.

Near the island of Guam is the famous Mariana Trench where the Pacific Plate descends under the leading edge of the Eurasian Plate. Measured at 36,201 feet - over 6.8 miles (11 km) deep, this trench is the deepest known spot in any ocean. In 1960, two men in the bathyscaph Trieste reached bottom of the Mariana Trench.

Other extensive trench regions around the world include the South Sandwich Trench between South America and Antarctica, the Peru-Chile Trench, and the Aleutian Trench.

All content from Kiddle encyclopedia articles (including the article images and facts) can be freely used under Attribution-ShareAlike license, unless stated otherwise. Cite this article:
Oceanic trench Facts for Kids. Kiddle Encyclopedia.