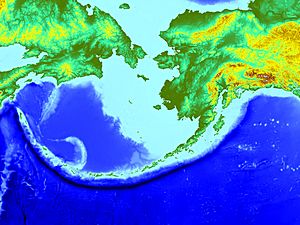 Map of the Aleutian Trench

The Aleutian Trench (or Aleutian Trough) is an oceanic trench along a convergent plate boundary which runs along the southern coastline of Alaska and the Aleutian islands. The trench extends for 3,400 kilometres (2,100 mi) from a triple junction in the west with the Ulakhan Fault and the northern end of the Kuril–Kamchatka Trench, to a junction with the northern end of the Queen Charlotte Fault system in the east. It is classified as a "marginal trench" in the east as it runs along the margin of the continent. The subduction along the trench gives rise to the Aleutian Arc, a volcanic island arc, where it runs through the open sea west of the Alaska Peninsula. As a convergent plate boundary, the trench forms part of the boundary between two tectonic plates. Here, the Pacific Plate is being subducted under the North American Plate at a dip angle of nearly 45°. The rate of closure is 7.5 centimetres (3 in) per year.

The subduction of the Pacific Plate below the North American Plate along the Aleutian Trench is associated with numerous earthquakes. Several of these earthquakes are notable for their size and/or associated tsunamis.

All content from Kiddle encyclopedia articles (including the article images and facts) can be freely used under Attribution-ShareAlike license, unless stated otherwise. Cite this article:
Aleutian Trench Facts for Kids. Kiddle Encyclopedia.