The location of the Mid-Atlantic Ridge

The Mid-Atlantic Ridge in Iceland 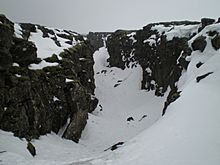 A fissure running along the Mid Atlantic Ridge in Iceland 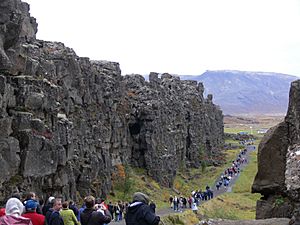 Rock outcrop in Iceland, a visible surface feature of the Mid-Atlantic Ridge, the Easternmost edge of the North American plate. It is a popular destination for tourists in Iceland.

The Mid-Atlantic Ridge is where seafloor spreading takes place in the middle of the Atlantic Ocean. It is part of a world-wide system of mid-ocean ridges. These ridges make up the longest mountain range in the world, all underwater except for short stretches like Iceland. On Iceland, the Mid-Atlantic Ridge reaches the surface.

The ridge separates oceanic tectonic plates, and moves the plates apart at about 2.5 cm per year.

The Mid-Atlantic Ridge includes a deep rift valley which runs along the middle of the ridge along almost its entire length. At the rift, the boundary between tectonic plates, magma from the mantle reaches the seafloor. New magma emerges onto the ocean floor near the ridge axis. The crystallized magma forms new crust of basalt and gabbro.

The ridge was discovered during the expedition of HMS Challenger in 1872. A team of scientists on board discovered a large rise in the middle of the Atlantic. They were planning the future location for a transatlantic telegraph cable. The existence of such a ridge was confirmed by sonar in 1925

In the 1950s, mapping of the Earth’s ocean floors showed the Mid-Atlantic Ridge to have valleys and ridges. Its central valley is seismologically active and the epicentre of many earthquakes. Ewing and Heezen discovered the ridge to be part of a 40,000-km-long essentially continuous system of mid-ocean ridges on the floors of all the Earth’s oceans. The discovery of this worldwide ridge system led to the theory of seafloor spreading and general acceptance of Wegener's theory of continental drift and expansion as plate tectonics.

The ridge started forming in at the end of the Triassic period, and was responsible for the separation of the Americas from Africa and Europe with the breakup of Pangaea.

The ridge sits atop a geologic feature known as the Mid-Atlantic Rise which is a progressive bulge that runs the length of the Atlantic Ocean, with the ridge resting on the highest point of this linear bulge. This bulge is thought to be caused by upward convective forces in the asthenosphere pushing up the oceanic crust and lithosphere.

All content from Kiddle encyclopedia articles (including the article images and facts) can be freely used under Attribution-ShareAlike license, unless stated otherwise. Cite this article:
Mid-Atlantic Ridge Facts for Kids. Kiddle Encyclopedia.