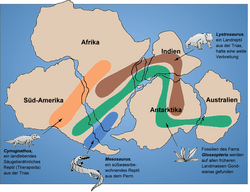 Fossil records suggesting that continents now separated were once together: see Pangaea

First known illustration of the opening of the Atlantic Ocean, by Antonio Snider-Pellegrini, 1858.

Continental drift is a historical, scientific theory. The theory was first proposed by Abraham Ortelius in 1596. It was fully developed by the German geologist and meteorologist Alfred Wegener in 1915.

The theory said that parts of the Earth's crust move slowly on top of a liquid mantle of higher density. The theory has now been included in the wider theory of plate tectonics.

The theory was supported by finding the same minerals and fossils in western Europe and eastern North America. There are also similar fossils on the western coast of Africa and the eastern South America. The shapes of these continents nearly fit together. The theory was plausible (believable), but there was no known mechanism to drive these great movements. This problem was later solved by plate tectonics.

The pattern of volcanic activity, mountain building (orogeny) and earthquakes is explained by continental drift. The existence of identical rocks widely apart supports the theory.

Examples (there are hundreds):

The basic machine driving continental movement is heat moving from the Earth's mantle through the crust and out of the planet. The effect of this it to cause convection, and plate movement.

Two events in particular are of huge importance:

All content from Kiddle encyclopedia articles (including the article images and facts) can be freely used under Attribution-ShareAlike license, unless stated otherwise. Cite this article:
Continental drift Facts for Kids. Kiddle Encyclopedia.