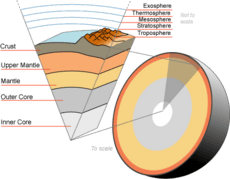 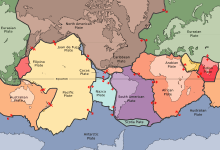 The tectonic plates of the lithosphere.

The lithosphere is the solid shell of the planet Earth. That means the crust, plus the part of the upper mantle that behaves elastically on long time scales.

Under the lithosphere there is the asthenosphere, the weaker, hotter, and deeper part of the upper mantle. This part can flow.

The lithosphere provides a conductive lid atop the convecting mantle: it reduces heat transport through the Earth.

There are two types of lithosphere:

The lithosphere is divided into tectonic plates, which move gradually relative to one another.

When a continental plate comes together with an oceanic plate, at a subduction zones, the oceanic lithosphere always sinks beneath the continental.

Another distinguishing characteristic of the lithosphere is its flow properties. Under the influence of the low-intensity, long-term stresses that drive tectonic motion, the lithosphere is like a rigid shell. It changes mainly by breaking ("brittle failure"). The asthenosphere (the layer of the mantle below the lithosphere) is heat-softened and adjusts by plastic changes ("deformation").

All content from Kiddle encyclopedia articles (including the article images and facts) can be freely used under Attribution-ShareAlike license, unless stated otherwise. Cite this article:
Lithosphere Facts for Kids. Kiddle Encyclopedia.