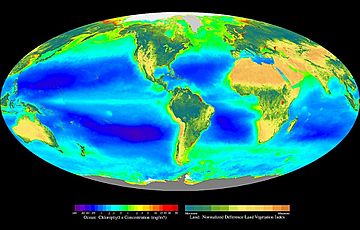 A false-color composite of global oceanic and terrestrial photoautotroph abundance, from September 1997 to August 2000

The biosphere includes everything living on Earth it is also known as ecosphere. Currently the biosphere has a biomass (or amount of living things) at around 1900 gigatonnes of carbon. It is not certain exactly how thick the biosphere is, though scientists predict that it is around 12,500 meters. The biosphere extends to the upper areas of the atmosphere, including birds and insects.

In a general sense, biospheres are any closed, self-regulating systems containing ecosystems. This includes artificial biospheres such as Biosphere 2 and BIOS-3, and potentially ones on other planets or moons.

The word "biosphere" was coined by geologist Eduard Suess in 1875. Which he difined as a place on Earth's surface where life dwells.

The earliest known evidence of life in Earth includes biogenic graphite dated as far as 3.7 Billion years old. Life is scattered all throughout the surface of the Earth, from the polar ice caps to the equator, exhibits a life of some kind.

Almost all parts of the planet contains a life of some kind. Recent advances in microbiology concluded that microbes can live deep beneath the Earth's surface.

All content from Kiddle encyclopedia articles (including the article images and facts) can be freely used under Attribution-ShareAlike license, unless stated otherwise. Cite this article:
Biosphere Facts for Kids. Kiddle Encyclopedia.