Kepler space telescope is a retired space telescope launched by NASA to discover Earth-size planets orbiting other stars. Named after astronomer Johannes Kepler, the spacecraft was launched on March 7, 2009, into an Earth-trailing heliocentric orbit. The principal investigator was William J. Borucki. After nine years of operation, the telescope's reaction control system fuel was depleted, and NASA announced its retirement on October 30, 2018.

Designed to survey a portion of Earth's region of the Milky Way to discover Earth-size exoplanets in or near habitable zones and estimate how many of the billions of stars in the Milky Way have such planets, Kepler's sole scientific instrument is a photometer that continually monitored the brightness of approx 150,000 main sequence stars in a fixed field of view. These data are transmitted to Earth, then analyzed to detect periodic dimming caused by exoplanets that cross in front of their host star. Only planets whose orbits are seen edge-on from Earth can be detected. During its over nine and a half years of service, Kepler observed 530,506 stars and detected 2,662 planets. 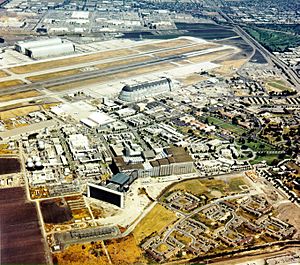 The initial planned lifetime was 3.5 years, but greater-than-expected noise in the data, from both the stars and the spacecraft, meant additional time was needed to fulfill all mission goals. Initially, in 2012, the mission was expected to be extended until 2016, but on July 14, 2012, one of the spacecraft's four reaction wheels used for pointing the spacecraft stopped turning, and completing the mission would only be possible if all other reaction wheels remained reliable. Then, on May 11, 2013, a second reaction wheel failed, disabling the collection of science data and threatening the continuation of the mission. 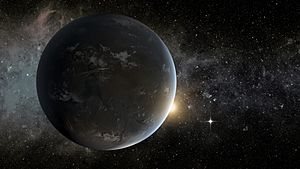 On August 15, 2013, NASA announced that they had given up trying to fix the two failed reaction wheels. This meant the current mission needed to be modified, but it did not necessarily mean the end of planet hunting. NASA had asked the space science community to propose alternative mission plans. On November 18, 2013, the K2 "Second Light" proposal was reported. This would include utilizing the disabled Kepler in a way that could detect habitable planets around smaller, dimmer red dwarfs. On May 16, 2014, NASA announced the approval of the K2 extension. 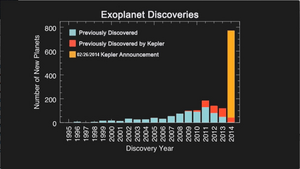 By January 2015, Kepler and its follow-up observations had found 1,013 confirmed exoplanets in about 440 star systems, along with a further 3,199 unconfirmed planet candidates. Four planets have been confirmed through Kepler's K2 mission. In November 2013, astronomers estimated, based on Kepler space mission data, that there could be as many as 40 billion rocky Earth-size exoplanets orbiting in the habitable zones of Sun-like stars and red dwarfs within the Milky Way. It is estimated that 11 billion of these planets may be orbiting Sun-like stars. The nearest such planet may be 3.7 parsecs (12 ly) away, according to the scientists. 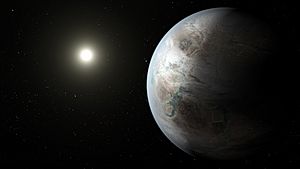 Artist's concept of one possible appearance of the planet Kepler-452b, the first near-Earth-size world to be found in the habitable zone of star that is similar to our sun

On January 6, 2015, NASA announced the 1,000th confirmed exoplanet discovered by the Kepler space telescope. Four of the newly confirmed exoplanets were found to orbit within habitable zones of their related stars: three of the four, Kepler-438b, Kepler-442b and Kepler-452b, are almost Earth-size and likely rocky; the fourth, Kepler-440b, is a super-Earth. On May 10, 2016, NASA verified 1,284 new exoplanets found by Kepler, the single largest finding of planets to date. 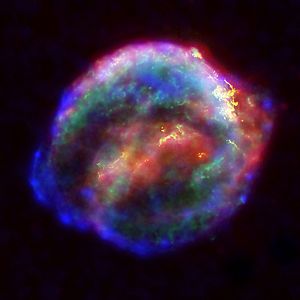 Kepler data has also helped scientists observe and understand supernovae; measurements were collected every half-hour so the light curves were especially useful for studying these types of astronomical events.

On October 30, 2018, after the spacecraft ran out of fuel, NASA announced that the telescope would be retired. The telescope was shut down the same day, bringing an end to its nine-year service. Kepler observed 530,506 stars and discovered 2,662 exoplanets over its lifetime. A newer NASA mission, TESS, launched in 2018, is continuing the search for exoplanets. 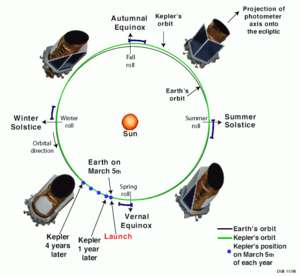 Kepler's orbit, the telescope's solar array was adjusted at solstices and equinoxes

Kepler was operated out of Boulder, Colorado, by the Laboratory for Atmospheric and Space Physics (LASP) under contract to Ball Aerospace & Technologies. The spacecraft's solar array was rotated to face the Sun at the solstices and equinoxes, so as to optimize the amount of sunlight falling on the solar array and to keep the heat radiator pointing towards deep space.

Together, LASP and Ball Aerospace controlled the spacecraft from a mission operations center located on the research campus of the University of Colorado. LASP performs essential mission planning and the initial collection and distribution of the science data. The mission's initial life-cycle cost was estimated at US$600 million, including funding for 3.5 years of operation. In 2012, NASA announced that the Kepler mission would be funded until 2016 at a cost of about $20 million per year. 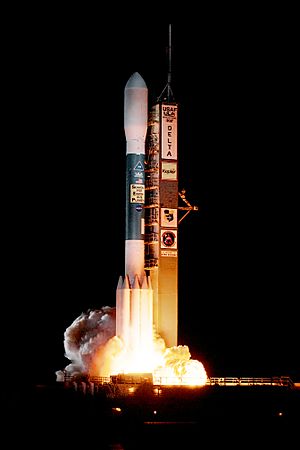 The scientific objective of Kepler is to explore the structure and diversity of planetary systems. This spacecraft observes a large sample of stars to achieve several key goals:

All content from Kiddle encyclopedia articles (including the article images and facts) can be freely used under Attribution-ShareAlike license, unless stated otherwise. Cite this article:
Kepler (spacecraft) Facts for Kids. Kiddle Encyclopedia.