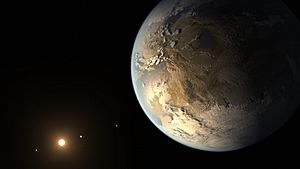 Kepler-186f is in the habitable zone of Kepler-186, so liquid water may be on its surface. However, just because a planet is in the habitable zone, dos not mean it is habitable. However, the find is still thought to be important, since it has a size similar to Earth's. It only receives one third of the sunlight Earth gets, hence its temprature is thought to be -91 Celsius. However, a greenhouse effect can help heat the surface up, and make it warmer.

A review from 2015 said that Kepler-186f, Kepler-442b, and Kepler-62f, are thought to be the best candidates for habitability.

All content from Kiddle encyclopedia articles (including the article images and facts) can be freely used under Attribution-ShareAlike license, unless stated otherwise. Cite this article:
Kepler-186f Facts for Kids. Kiddle Encyclopedia.