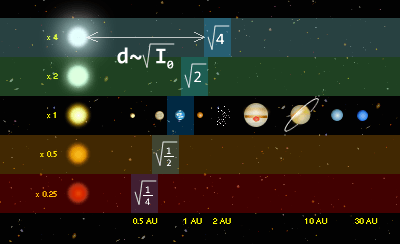 A habitable zone (HZ) in astronomy is a region of space where conditions are best for life to form as on Earth. Planets in these areas are the most likely to have extraterrestrial life.

The habitable zone may also be called the "life zone", "comfort zone", "green belt" or "Goldilocks zone". One in five stars has an Earth-sized planet in the habitable zone. However, it is not known what proportion would have conditions suitable for life.

The Goldilocks principle or 'Goldilocks effect' is that something must be within limits: "not too hot, not too cold, but just right".

It is taken from a children's story "The Three Bears" in which a little girl named Goldilocks finds a house owned by three bears. Each bear has their own preference of food, beds, etc. After testing each of the three items, Goldilocks determines that one of them is always too much in one extreme (too hot, too large, etc.), one is too much in the opposite extreme (too cold, too small, etc.), and one is "just right".

In astrobiology, the Goldilocks zone refers to the habitable zone around a star. A planet must neither be too far away from, nor too close to a star and galactic centre to support life. Either extreme would prevent a planet evolving life. Such a planet is colloquially called a "Goldilocks planet".

Planets are evaluated on these seven criteria:

This concept is not so widely used. It is the idea that a solar system must also be in a suitable place inside a galaxy for life to form.

Some areas of galaxies are better suited to life than others. The Solar System in which we live, in the Orion Spur, on the Milky Way galaxy's edge is a life-favorable spot, since we are there.

The habitable zone is the region around a star where a planet has sufficient atmospheric pressure to keep liquid water on its surface.

A habitable planet candidate implies a terrestrial planet within the zone, and with conditions roughly comparable to those of the Earth (i.e. an Earth analog) and thus potentially favourable to life.

Only about a dozen planets have been confirmed in the habitable zone, but the Kepler spacecraft has identified a further 54 candidates. Estimates suggest that there are "at least 500 million" such planets in the Milky Way.

The table can be sorted by clicking the up or down arrows.

All content from Kiddle encyclopedia articles (including the article images and facts) can be freely used under Attribution-ShareAlike license, unless stated otherwise. Cite this article:
Habitable zone Facts for Kids. Kiddle Encyclopedia.