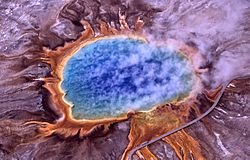 Thermophiles, a type of extremophile, produce some of the bright colors of Grand Prismatic Spring, Yellowstone National Park

An extremophile is an organism (a living thing) which lives best in extreme conditions that are harmful to most life on Earth. They are different from organisms that live in normal places, called mesophiles or neutrophiles.

In the 1980s and 1990s, biologists found that microbes can survive in extreme environments. These are niches that are extreme in some way. They may be extremely hot, or cold, or dry, or under huge pressure, or very salty or acidic. Complex organisms, such as animals or plants, cannot live in these environments.

Some scientists suggest that life may have begun on Earth in hydrothermal vents far below the ocean surface. Environments such as hot oceans, hot springs and deep ocean hydrothermal vents would have been common during the Archaean eon, about 3.9 billion years ago. Early forms of life lived in those conditions.

Some extremophiles fall under several categories. For example, organisms living inside hot rocks deep under Earth's surface are both thermophilic and barophilic.

All content from Kiddle encyclopedia articles (including the article images and facts) can be freely used under Attribution-ShareAlike license, unless stated otherwise. Cite this article:
Extremophile Facts for Kids. Kiddle Encyclopedia.