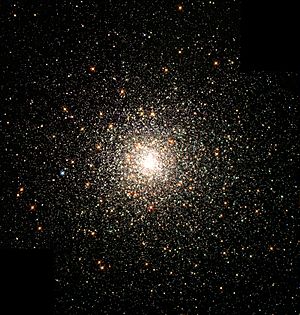 The Messier 80 globular cluster in the constellation Scorpius is about 28,000 light-years from the Sun. It has several hundred thousand stars.

A globular cluster is a group of stars of a similar age which often orbits the central bulge of a galaxy. Gravity holds clusters together and gives them their spherical shape. Towards the centre of a clusters there are many stars in a relatively small space.

Some giant elliptical galaxies, particularly those at the centres of galaxy clusters, such as M87, have as many as 13,000 globular clusters. These globular clusters orbit the galaxy out to huge distances, 40 kiloparsecs (approximately 131,000 light-years) or more.

William Herschel began a survey program in 1782 using larger telescopes and was able to resolve the stars in all 33 of the known globular clusters. In addition he found 37 additional clusters. In Herschel's 1789 catalog of deep sky objects, his second such, he became the first to use the name globular cluster as their description.

All content from Kiddle encyclopedia articles (including the article images and facts) can be freely used under Attribution-ShareAlike license, unless stated otherwise. Cite this article:
Globular cluster Facts for Kids. Kiddle Encyclopedia.