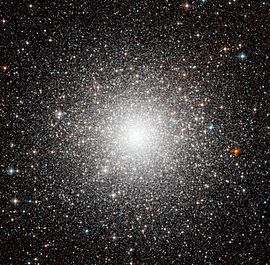 Messier 54 (or M54 or NGC 6715) is a globular cluster in the constellation Sagittarius. It was discovered by Charles Messier in 1778. Later, he included it in his catalog of comet-like objects.

M54 was thought to belong to our Milky Way galaxy, but in 1994 it was discovered that M54 belongs to the Sagittarius dwarf elliptical galaxy ('Sag DEG'),

M54 is easily found in the sky, being close to the star ζ Sagittarii. Individual stars cannot be seen with amateur telescopes.

It is on or near SagDEG's center. Some authors think it actually may be its core; but others do not.

In July 2009, a team of astronomers found evidence of a medium-sized black hole in the core of M54.

All content from Kiddle encyclopedia articles (including the article images and facts) can be freely used under Attribution-ShareAlike license, unless stated otherwise. Cite this article:
Messier 54 Facts for Kids. Kiddle Encyclopedia.