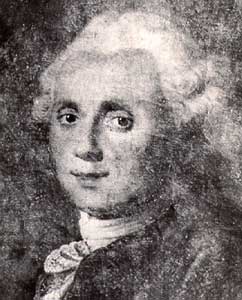 Charles Messier (June 26, 1730 – April 12, 1817) was a French astronomer who is remembered for publishing a list of famous objects in space that came to be called the 103 "Messier objects".

Messier was born in Badonviller in the Lorraine region of France. Six of his brothers and sisters died as children and in 1741, his father died. Charles became interested in astronomy after he saw the great six-tailed comet in 1744 and by a solar eclipse on July 25, 1748.

In 1751 he started working for Joseph Nicolas Delisle, the astronomer of the French Navy, who told him to write down everything he saw.

All content from Kiddle encyclopedia articles (including the article images and facts) can be freely used under Attribution-ShareAlike license, unless stated otherwise. Cite this article:
Charles Messier Facts for Kids. Kiddle Encyclopedia.