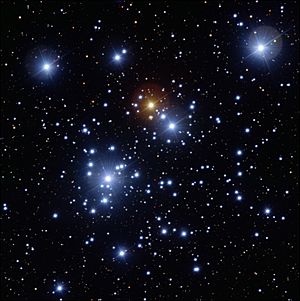 The Caldwell catalogue is an astronomical catalogue of 109 objects. It includes star clusters, nebulae, and galaxies for observation by amateur astronomers. The list was compiled by English astronomer Patrick Moore as a complement to the Messier catalogue.

The Messier catalogue is used by amateur astronomers as a list of deep-sky objects for observation. However, it was not compiled for that purpose. It does not include many of the sky's brightest deep-sky objects, such as the Hyades, the Double Cluster (NGC 869 and NGC 884), and the Sculptor Galaxy (NGC 253). The Messier catalogue was compiled as a list of known objects that might be confused with comets. As Messier got his list from observations in Paris, it did not include bright deep-sky objects visible in the Southern Hemisphere, such as Omega Centauri, Centaurus A, the Jewel Box, and 47 Tucanae.

So Moore compiled a list of 109 objects – to match the accepted number of Messier objects. The list was published in Sky & Telescope in December 1995.

All content from Kiddle encyclopedia articles (including the article images and facts) can be freely used under Attribution-ShareAlike license, unless stated otherwise. Cite this article:
Caldwell catalogue Facts for Kids. Kiddle Encyclopedia.