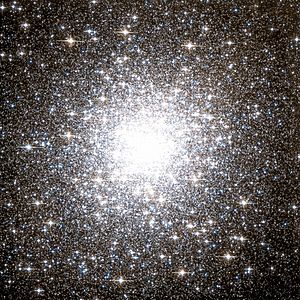 A star cluster is a group of stars. They are held together by mutual gravitation. They are related by common origin, and have similar or identical ages.

In contrast, constellations and asterisms are just line-of-sight visual groups as seen from the Earth.

There are two major types of clusters:

Star clusters visible to the naked eye include the Pleiades, Hyades, and 47 Tucanae.

Super star clusters of very young large stars are known. They are thought to be precursors of globular clusters. The short-lived huge blue stars emit lots of UV radiation which ionises the surrounding gas. Examples are Westerlund 1 and 2 in the Milky Way, and R136 in the Larger Magellanic Cloud.

All content from Kiddle encyclopedia articles (including the article images and facts) can be freely used under Attribution-ShareAlike license, unless stated otherwise. Cite this article:
Star cluster Facts for Kids. Kiddle Encyclopedia.