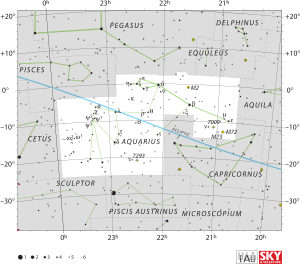 Aquarius is a constellation of the zodiac. It sits between Capricornus and Pisces. Its name is Latin for "water-carrier" or "cup-carrier", and its symbol is

(Unicode ♒), which represents water. The astronomer Ptolemy listed Aquarius when he made a list of 48 constellations. It is also one of the 88 modern constellations.

Aquarius is a constellation also known as the Water Bearer and was a servant to the gods. He was also a human at one time. He was the son of King Tors. When he was human, his name was Ganymede. Usually when you see him in the sky, you can see him pouring water into the mouth of a fish; or Pisces.

There is a story of Ganymede when he was watching over his father’s sheep, he was captured and held captive by the Goddess of the Dawn.

In another version of the story, Zeus is captured by Ganymede. Than Zeus calls over his pet eagle to grab Ganymede and take him to the top of Mount Olympus and serve as a servant to the gods.

All content from Kiddle encyclopedia articles (including the article images and facts) can be freely used under Attribution-ShareAlike license, unless stated otherwise. Cite this article:
Aquarius (constellation) Facts for Kids. Kiddle Encyclopedia.