Aquila is a constellation. The name means 'eagle' in Latin. The constellation is normally represented as an eagle.

Aquila is just a few degrees North of the celestial equator. The constellation is best seen in the summer as it is along the Milky Way. Because of this location along the line of our galaxy, many clusters and nebulae are within its borders. However, they are dim and there are not many galaxies.

The Greek Aquila is probably based on the Babylonian constellation of the Eagle (MUL.A.MUSHEN), which is in the same area as the Greek constellation.

Two major novae have been observed in Aquila. The first one was in 389 BC and was recorded as being as bright as Venus. The other was in 1918 and is known as (Nova Aquilae 1918). It briefly shone brighter than Altair, the brightest star in Aquila.

In illustrations of Aquila that represent it as an eagle, a nearly straight line of three stars symbolizes part of the wings. The center and brightest of these three stars is Altair. The tips of the wings spread out to the southeast and northwest. The head of the eagle stretches off to the southwest. 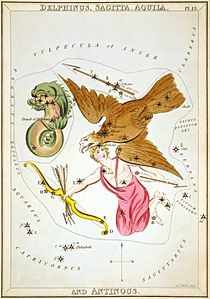 Aquila, with the now-obsolete figure of Antinous, as depicted in Urania's Mirror, a set of constellation cards published in London c.1825. At left is Delphinus.

In mythology, Aquila was owned by the Roman god Jupiter and did many tasks for him.

In a book by Gavin White, the Babylonian Eagle carried the constellation called the Dead Man (LU.USH) in its talons. The author also draws a comparison to the Classical stories of Antinous and Ganymede.

In classical Greek mythology, Aquila was identified as Αετός Δίας (Aetos Dios). He was the eagle that carried the thunderbolts of Zeus. He was sent by Zeus to carry the shepherd boy Ganymede to Mount Olympus. The constellation of Aquarius is sometimes identified with Ganymede.

In the Chinese love story of Qi Xi, Niu Lang (Altair) and his two children (β and γ Aquilae) are separated forever from their wife and mother Zhi Nu (Vega) who is on the far side of the river, the Milky Way.

In Hinduism, the constellation Aquila is identified with the half-eagle half-human deity Garuda.

In Chinese astronomy, ζ Aql is within the Heavenly Market Enclosure (天市垣, Tiān Shì Yuán), and the other stars of the constellation are placed within the Black Tortoise of the North (北方玄武, Běi Fāng Xuán Wǔ).

All content from Kiddle encyclopedia articles (including the article images and facts) can be freely used under Attribution-ShareAlike license, unless stated otherwise. Cite this article:
Aquila (constellation) Facts for Kids. Kiddle Encyclopedia.