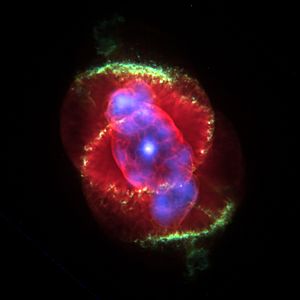 A planetary nebula is a nebula that is made up of gas and plasma. They are made by certain types of stars when they die. They are named this because they look like planets through small optical telescopes. They do not last for very long compared to a star, only tens of thousands of years.

At the end of a normal-sized star's life, in the red giant phase, the outside layers of a star are disposed of. Because the outside is gone, the star shines brightly and is very hot. The ultraviolet radiation given off by the center of the star ionizes the gas and plasma that was thrown out from the star. This is what causes a planetary nebula to look like it does.

Planetary nebulae are very special objects because they can help make more stars. When a star dies, the metals that were in the core of the star are sent to other places in the universe. The only place that these metals form are in stars. This is called nucleosynthesis.

The pictures of these nebulae show that they have very weird shapes. Scientists are not sure why they are not all spheres. There are many theories about why they are not. They think that binary stars, stellar winds and magnetic fields might be part of the reason they look so special. 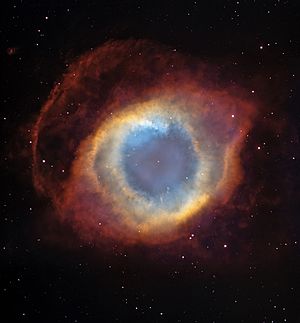 Planetary nebula are not very bright. None of them are bright enough to see without a telescope. The first one discovered was the Dumbbell Nebula. To early astronomers they looked like gas giants. This is why people called them 'planetary nebula'. We still call them this even though we know they are not planets. Astronomers did not know what these objects were until the first spectroscopic experiments were done in the 1800's. William Huggins used a prism to look at galaxies. He noticed that they looked a lot like stars.

When he looked at the Cat's Eye Nebula, it did not look the same. He saw an emission line at a place that no one had seen before. This meant that it looked like an element that no one had ever seen before. Scientists thought it might be a new element. They decided to call it nebulium. 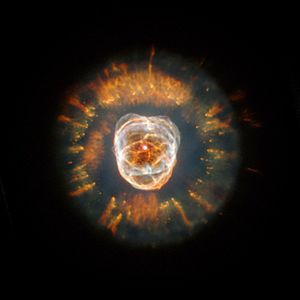 Later, physicists showed that it is possible for gasses with a very low density to look like something else. It turned out that the gas they were looking at was oxygen, and not nebulium.

The stars in planetary nebulae are very hot. They are not very bright, though. This means that they must be very small. The only time that stars get that small is when they are dying. That means that they are one of the last steps in a star's death. Astronomers saw that all planetary nebula are expanding. This meant that they were caused by a star's outer layers being thrown into space at the end of its life.

Stars weighing more than 8 solar masses will supernova. Stars that weigh as much as the Sun will become planetary nebulae. After billions of years, a star will run out of hydrogen. This makes the star colder, and makes the core smaller. The sun's core is about 15 million degrees Kelvin. When it runs out of hydrogen, the smaller core will cause it to rise to about 100 million degrees Kelvin.

The outer layers of the star grow a lot because of the heat of the core, and become much cooler. The star becomes a red giant. The core gets even smaller and hotter. When its reaches 100 million K, helium begins to fuse into carbon and oxygen. When this happens, the core stops shrinking. Helium burning soon forms a core of carbon and oxygen, with both a helium and a hydrogen shell surrounding it.

Because helium in fusion reactions is not very stable, the core starts to grow and shrink very quickly. This causes the gas and plasma in the outer layer of the star to move outwards. These gases form a cloud around the core of the star. As more and more of the gas moves away from the star, deeper and deeper layers at higher and higher temperatures are sent out. When the gas heats up to around 30,000 degrees kelvin, the gas starts to glow. The cloud has then become a planetary nebula.

Numbers and where they are

Only about twenty percent of planetary nebulae are spheres (like Abell 39). The rest of them have very weird shapes. The reason for all of these shapes is not understood, but it may be because of gravity with secondary stars if it is a binary star system. A second theory is that planets near the star might change how the nebula forms. A third theory is that magnetic fields cause the shapes. [1].

All content from Kiddle encyclopedia articles (including the article images and facts) can be freely used under Attribution-ShareAlike license, unless stated otherwise. Cite this article:
Planetary nebula Facts for Kids. Kiddle Encyclopedia.