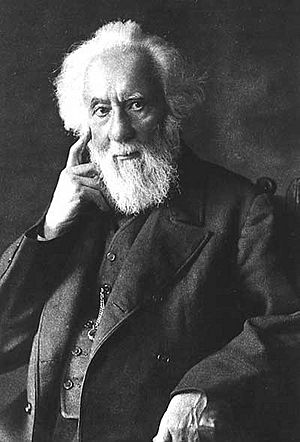 Sir William Huggins, KCB, OM, FRS, (7 February 1824–12 May 1910) was an English astronomer best known for his work in astronomical spectroscopy.

William Huggins was born at Cornhill, Middlesex in 1824. He married Margaret Lindsay, who was also an astronomer. Huggins built his own observatory from where he and his wife looked at spectral emission lines and absorption lines of astronomical objects. He was the first person to figure out the difference between nebulae and galaxies. Huggins was president of the Royal Society between 1900 and 1905.

All content from Kiddle encyclopedia articles (including the article images and facts) can be freely used under Attribution-ShareAlike license, unless stated otherwise. Cite this article:
William Huggins Facts for Kids. Kiddle Encyclopedia.