Tulse Hill is a district in the London Borough of Lambeth in south London that sits on Brockwell Park. It is approximately five miles from Charing Cross and is bordered by Brixton, Dulwich, Herne Hill, Streatham, and West Norwood.

A map showing the Tulse Hill ward of Lambeth Metropolitan Borough as it appeared in 1916.

The area known as Tulse Hill is part of the former Manor or Manors of Bodley, Upgroves and Scarlettes whose precise boundaries are now uncertain. The name of the area comes from the Tulse family who came into ownership of farmland in the area during the period of the Commonwealth in the 1650s. Sir Henry Tulse was Lord Mayor of London in 1683 and his daughter Elizabeth married Richard Onslow, 1st Baron Onslow. The land remained in Onslow ownership until 1789 when most of it was purchased by William Cole. The estate was further divided on Cole's death in 1807.

The western part was left to "Mercy Cressingham, spinster" (now commemorated by the Cressingham Gardens estate in the area) and the eastern part -now mostly occupied by Brockwell Park - was left to Richard Ogbourne who promptly sold it on to John Blades.

In 1810 Tulse Hill Farm was the only building in western part of the area. The enclosure of land in the parish of Lambeth in 1811 led to the construction of Effra Road in the area immediately to the north. Together with improvements to Brixton Road by the local turnpike trust this greatly improved road communications with central London, and the value of the local landholdings.

The heiress Miss Cressingham did not remain a spinster for long. Her husband Dr Thomas Edwards, took the initiative in buying extra land to make an access from Brixton Hill in 1814 and laying out two new roads Lower Tulse Hill Road (now known simply as Tulse Hill) and Upper Tulse Hill Road (now Upper Tulse Hill) before 1821. A plan of 1821 in the RIBA Library shows a proposed speculative development of both the Edwards estate and the adjacent Blades estate with large detached villas, although only the former actually came to fruition. The new roads were adopted by the parish in 1822.

An 1832 map shows that Tulse Hill still had only a few buildings on the new roads in contrast to nearby recently developed areas in Brixton and Norwood and the longer established hamlet of Dulwich. However, by 1843, there was a continuous line of houses, predominantly detached and usually with separate coach houses along the full length of Lower Tulse Hill Road from Brixton to the top of the hill.

Major development of the area further east did not come until the opening of Tulse Hill railway station in 1868.

Most of the original villas with large gardens on the original Edwards-Cressingham landholding have been redeveloped at much higher densities for council housing since the 1930s.

The most prominent survival of 19th century Tulse Hill is Berry House, later called Silwood Hall, and now forming the front part of St Martin-In-The-Fields High School for Girls, a Church of England secondary school which has outlasted the nearby 1950s schools.

The redevelopment of Tulse Hill after World War II by the London County Council had included the construction of two large secondary schools - Tulse Hill School and Dick Sheppard School (originally for girls only). Both schools have now closed, and their sites have been redeveloped for housing of very contrasting types. The Dick Sheppard School site was redeveloped as Brockwell Gate, a gated Regency style with houses and apartments overlooking Brockwell Park.

The site of Tulse Hill school was redeveloped as affordable housing. It appeared on the news on 22 July 2005 after a police surveillance operation on a blocks of flats in Scotia Road within the new development. Following the 21 July 2005 London bombings, the terrorist suspect Osman Hussain was linked to a flat in the block. Brazilian electrician Jean Charles de Menezes was a resident of the same block and was fatally shot at Stockwell tube station by the police who had been tracking Hussain. 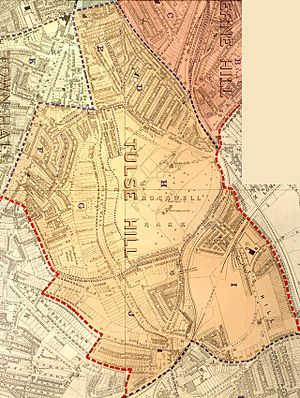 A map showing Tulse Hill as it appeared in 1918.

Tulse Hill railway station (Zone 3) is served by the Southern Metro via Peckham Rye line (to London Bridge) and the Thameslink Wimbledon loop (to Blackfriars, St Pancras International, St Albans, and Luton). The railway bridge over the A205 was frequently subject to vehicle strikes until a new warning system was installed in 2017.

Nearby stations provide services to Victoria from Herne Hill and West Dulwich (via the Southeastern Metro Bromley South line) and from West Norwood (via the Southern Crystal Palace line).

The nearest London Underground station is Brixton on the Victoria line.

At the southern end of Tulse Hill is a major road junction between the A204 (Tulse Hill), A205 (South Circular) and the A215 (Norwood Road) where the historic Tulse Hill Hotel stands.

The Edible Bus Stop, on Norwood Road, is a guerrilla garden venture on a WWII bomb site. It features a biodiverse range of plants and herbs not otherwise found growing in London.

Jason Strugnell, a fictional poet in Wendy Cope's "Making Cocoa For Kingsley Amis", lives in Tulse Hill and mentions it a couple of times in "his" poems.

The "Tulse Hill Parliament", a political club, features in P. G. Wodehouse's comic novel Psmith in the City. The author attended Dulwich College, which is in the vicinity.

Noel Streatfeild's novel "Tennis Shoes" (1937) is written about a family who live in Tulse Hill.

All content from Kiddle encyclopedia articles (including the article images and facts) can be freely used under Attribution-ShareAlike license, unless stated otherwise. Cite this article:
Tulse Hill Facts for Kids. Kiddle Encyclopedia.