Blackfriars station is a London Underground and National Rail station in the City of London. It is close to Blackfriars Bridge at the junction of New Bridge Street and Queen Victoria Street. It is in Travelcard Zone 1. The Underground station was closed until 2011 while refurbishment and major engineering works took place. 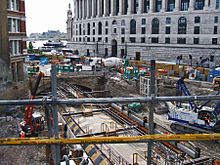 Blackfriars station is being rebuilt and the office building above it demolished and replaced as part of the Thameslink programme. The mainline station remained open during this work except for a period of two months around Christmas 2010 when trains passed through without stopping. The Underground station was closed until late 2011.

All content from Kiddle encyclopedia articles (including the article images and facts) can be freely used under Attribution-ShareAlike license, unless stated otherwise. Cite this article:
Blackfriars station Facts for Kids. Kiddle Encyclopedia.