Thameslink is a route in the British railway system. It has 68 stations. It is 225 km (140 mi) long. It runs north to south through London from Bedford to Brighton. It goes to London Gatwick Airport and London Luton Airport. It has a suburban loop that goes to Sutton and Wimbledon. On weekdays a suburban line goes through Catford and Bromley South to Sevenoaks. It opened as a through service in 1988. By 1998, it was very overcrowded, carrying more than 28,000 passengers in the morning peak. Almost all the services are currently operated by Thameslink. 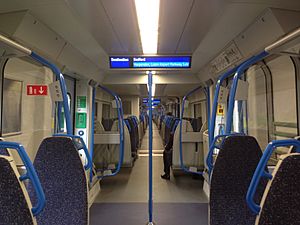 The interior of a Class 700 Thameslink train towards Bedford.

All content from Kiddle encyclopedia articles (including the article images and facts) can be freely used under Attribution-ShareAlike license, unless stated otherwise. Cite this article:
Thameslink Facts for Kids. Kiddle Encyclopedia.