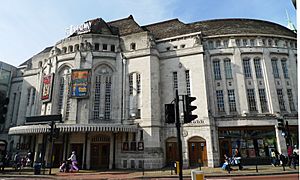 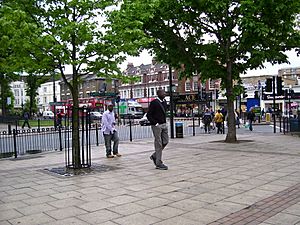 The town centre, with the 'village green' including water pump just visible to the right

Catford is a district of south east London, within the London Borough of Lewisham. It is located south west of Lewisham. The area is the civic administrative centre for the local authority, and comprises both the Town Hall & Civic Suite. The majority of Catford is located in the Rushey Green and Catford South wards within the Borough.

The area is identified in the London Plan as one of 35 major centres in Greater London.

A map showing the Catford ward of Lewisham Metropolitan Borough as it appeared in 1916.

The name derives from the place where cattle crossed the River Ravensbourne in Saxon times.

Catford was historically part of Kent until 1889, when it was absorbed into the new London County Council, along with the majority of the present day London Borough of Lewisham. Catford covers most of SE6 postcode district. The area is identified in the London Plan as one of 35 major centres in Greater London. 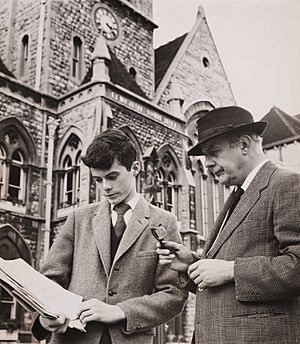 Broadway Theatre is an art deco building adjoining the town hall. It is a curved stone structure decorated with shields and heraldic emblems and topped with a copper-green spire. It was opened in 1932 as the Concert Hall and is now a Grade II listed building. The interior is in art deco style. The last cinema in the borough stood diagonally opposite the theatre until its closure in 2002. Catford also boasts a large Gothic police station. In 2006, a large blue pipe sculpture was unveiled outside Eros House, which was another former cinema (The Eros Cinema), and the Lewisham Hippodrome theatre .

The 1960s and 70s had a considerable impact on the architecture of Catford. The old Town Hall of 1875, was replaced by the current Civic Suite in 1968, soon after the merger of the metropolitan boroughs of Lewisham and Deptford. Laurence House, where many of the Lewisham Council offices are housed, is on the site of old St Laurence's Church. The original Gothic C of E St. Laurence Church was located where Laurence House is today (known as the Catford Cathedral), but as part of the urban renewal of Catford in the 1960s, the church is now housed in a more modern style building 200 metres down Bromley Road.

In Rushey Green the old village water hand-pump from the 1850s survives.

At the end of World War II, the 188-bungalow Excalibur Estate was laid out in Catford, and by 2011 this was the largest surviving prefab estate in Britain. However, it is now planned that all but six of the prefabs will be demolished and replaced by new housing, although many residents voiced their opposition to demolition.

A few examples of Brutalist architecture survive including the Catford shopping centre and Milford Towers, designed by the architect Owen Luder in 1974. The design was to make it the Barbican of the south.

A monster sat down in Catford and just what the place needed. No offence meant: this southward extension of Lewisham High Street badly wanted stiffening. Now there is a punchy concrete focus (`you know, that funny new building') both close to and at a distance, from the desolate heights of the Downham Estate, where it stands straight to the afternoon sun. Rough concrete is put through all its paces, front convex eaves on Sainsbury's to a staircase tower which is either afflicted with an astounding set of visual distortions or is actually leaning. Again, no offence meant. Unlike many other avant-garde buildings, particularly in the universities, this one is done from real conviction, not from a desire for self-advertisement. The gaunt honesty of those projecting concrete frames carrying boxed-out bow windows persists. It is not done at you and it transforms the surroundings instead of despising them. This most craggy and uncompromising of London buildings turns out to be full of firm gentleness.

Current plans put forward by Lewisham Council are to demolish Milford Towers, as the estate has fallen into disrepair and the land can be better used to meet the needs of local residents.

Catford's most prominent landmark is the Catford Cat, a giant fibreglass sculpture of a black cat above the entrance to the Catford Centre. This is a small shopping centre, housing Tesco and Iceland supermarkets as well as other high street stores. There is a street market on Catford Broadway. Catford has several pubs and a variety of non-chain restaurants and cafes.

Catford's oldest pub is the Black Horse and Harrow and Karl Marx is reputed to have been an occasional patron. though the present building dates from 1897. Between 1932 and 2003, Catford Stadium was a successful greyhound racing track, but was closed and then destroyed by fire in 2005 and ultimately demolished to make way for a new housing development.

The Catford Bridge Tavern is another heritage listed building close to the old dog track; this mock tudor pub burnt down in March 2015. Nearby, is St Dunstan's College.

Other than the shows at the Broadway Theatre the main cultural events are Lewisham Peoples day held in Mountsfield Park.

The area was once home to the Catford Studios, producing films during the silent era. Catford also use to have a cinema diametric to the theatre. Catford was also satirised in The Chap magazine in a series called 'A Year in Catford' named after Peter Mayle's best-seller A Year in Provence. The magazine poked fun at Catford's mundanity.

Catford is a priority area for regeneration in the London Borough of Lewisham. Several key sites around the town centre have been identified for redevelopment - Milford Towers, Catford Dog Track, Catford Island, The Civic Centre, Lewisham Town Hall & The "Wickes" site have all been highlighted for significant change in the proposed Catford Plan.

Previous attempts to regenerate Catford have been hampered by various complex issues such as the number of different landowners in and around the town centre. However, in 2010, as a sign of commitment to ensuring a regeneration of the area, the Council seized upon the opportunity to buy Catford Shopping Centre, thereby giving it greater influence over future plans.

The Council’s aspiration is for the complete redevelopment of the Catford Centre and Milford Towers, which would require demolition of both plus the car parks and associated buildings along Thomas Lane. Lewisham Council are currently working towards a target vacant possession date for the site of late 2015, although this is subject to many factors, including identifying a deliverable scheme, and agreeing commercial terms with the key parties who are, or will be, involved in the redevelopment of the site.

In the meantime, £1.5 million has been secured from the Mayor of London's Outer London Fund to make improvements to Catford Broadway which would benefit businesses, residents and shoppers and help to maintain the vitality of the town centre during any future redevelopment works.

Catford Broadway and Catford Market already play a significant role in terms of the local economy. The Council hopes to make substantial changes to the town centre as a whole and, in order to facilitate this, Catford Shopping Centre may close for between one and two years.

In 2011, the Council successfully obtained £125,000 from Round 1 of the Mayor of London's Outer London Fund to develop designs and carry out feasibility surveys to explore how Catford Broadway could provide a better environment for businesses, residents and shoppers. The results of this work formed part of a bid for further Outer London Fund money, and in January 2012 it was announced that just under £1.5 million has been allocated to carry out a series of improvements. The Council is providing approximately £600,000 in match funding.

The refurbishment of the street began in June 2013 and was completed in 2014.

Catford is served by many Transport for London bus routes.

Catford's main road is the A205 South Circular which crosses South London, running from Woolwich in the east to the junction of the A406 (North Circular Road), the M4 and the A4 at Gunnersbury in the west.

It has been highlighted in the Rail Utilisation Strategy that there should be a capital infrastructure development in the medium term of developing the Bakerloo line from Elephant and Castle through to Catford. This programme of work is known as the Bakerloo line extension and could start as early as 2020.

TfL are currently considering the extension of the Docklands Light Railway (DLR) from Lewisham to Bromley, with the first phase being from Lewisham to Catford. So far TfL have not expressed a preferred route, provided detailed plans, or indicated costs and funding. Lewisham Council has suggested that any route should be underground to reduce physical and visual impact.

All content from Kiddle encyclopedia articles (including the article images and facts) can be freely used under Attribution-ShareAlike license, unless stated otherwise. Cite this article:
Catford Facts for Kids. Kiddle Encyclopedia.