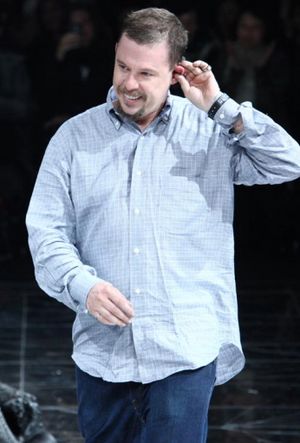 Lee Alexander McQueen (17 March 1969 – 11 February 2010) was a British fashion designer and couturier. His creative and experimental design received a lot of attention in the world of fashion.

McQueen was born on 17 March 1969 in Lewisham, London. He started drawing at age three. He wanted to be a designer since he was in primary school. McQueen left school at age 16 and started to serve an apprenticeship with Savile Row tailors in 'Anderson & Sheppard'. Afterwards, he also worked for 'Gieves & Hawkes', which made stage costumes for famous shows in London. The skills he learned as an apprentice on Savile Row helped him to get a reputation in the fashion world. At the age of 21, McQueen was hired by Romeo Gigli as assistant designer in Italy. 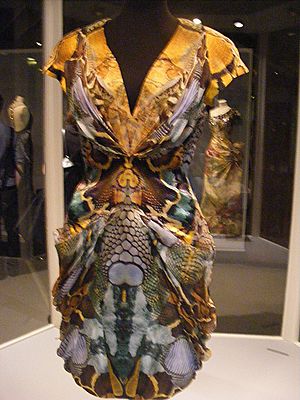 A dress from his last show, V&A Museum

In 1994, McQueen returned to London and got a master's degree from Central Saint Martins College. It was the turning point that led him to be a designer. McQueen worked at Givenchy as a head designer from 1996 to 2001. After he separated with Givenchy, he focused on his own label. Then, in 2001, he made a debut with The Dance of the Twisted Bull collection in Paris which provoked some scandals.

In 2001 "Gucci" Group got 51% shares of Alexander McQueen brand, which was named after McQueen, and became his new partner. As time passed, McQueen launched "McQ" as second brand, and "My Queen" as perfume brand. McQueen also conducted various brand and design collaboration with Puma, Samsonite and Chivas Regal. By the end of 2006, Alexander McQueen brand has entered 25 cities including London, Paris, New York, Boston, Milan, Moscow, Tokyo and Seoul.

McQueen was openly gay. After his death in 2010, Sarah Burton became the chief designer of the Alexander McQueen business.

All content from Kiddle encyclopedia articles (including the article images and facts) can be freely used under Attribution-ShareAlike license, unless stated otherwise. Cite this article:
Alexander McQueen Facts for Kids. Kiddle Encyclopedia.