The Musée national des beaux-arts du Québec (English: National Museum of Fine Arts of Quebec), abbreviated as MNBAQ, is an art museum in Quebec City, Quebec, Canada. The museum is situated in Battlefield Park and is a complex consisting of four buildings. Three of the buildings were purpose-built for the museum. One building was initially built as a provincial prison before being repurposed for museum use.

The collection includes over 40,000 works from the 16th century to the present day. The collection primarily includes works that were produced in Quebec, or by a Quebec artist, although it also includes works from other parts of Canada, and the rest of the world. The museum is affiliated with the Canadian Museums Association, the Canadian Heritage Information Network, and the Virtual Museum of Canada. 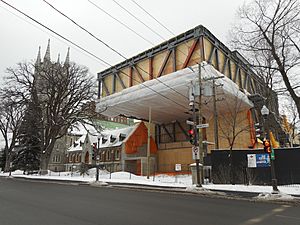 Construction for the Pierre Lassonde Pavilion in 2014

Prior to the establishment of the museum, the province acquired several items and works in order to establish a provincial collection of art and natural history. The premier of Quebec, Lomer Gouin, first proposed the idea of establishing a provincial collection of art as a part of a program to "define the Quebec nation". However, the collections were primarily established and organized under his successor, Louis-Alexandre Taschereau. The program formally began in March 1920, when the cabinet minister, Athanase David, announced an initiative where the province would support Quebec-based artists by purchasing their works. A five-man jury initially selected works for the collection, selecting works they believed pushed the concept of a common rural past, and affirmed "innovative art trends", by artists in Quebec.

In 1922, the legislature of Quebec passed the Loi des musées de la province du Québec (English: Act Respecting Museums in the Province of Quebec), providing funding for the construction of museums throughout the province. However, construction for the Gérard-Morisset Pavilion did not begin until 1928; the museum finally opened to the public in June 1933. Initially, the institution served as an art, natural science museum, and provincial archive.

From 1989 to 1991, the museum renovated its original building, and expanded the building complex with the acquisition of the Charles Baillairgé Pavilion. The acquisition and renovation of the former prison building more than doubled the surface space the museum had. The renovation of the former prison expanded the museum's viewing space to 12 galleries, and provided space for an auditorium, a giftshop, restaurant, storerooms, and workshops. The museum's sculpture garden was completed shortly after the Charles Baillairginé Pavilion opened in 1993.

In 2002, the museum was renamed the Musée national des beaux-arts du Québec. Construction for the Pierre Lassonde Pavilion began in 2013 and opened to the public in 2016. 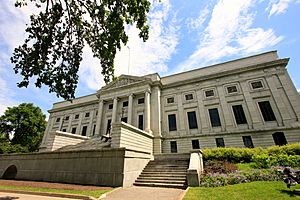 The property is situated in Battlefield Park, with the museum complex made up of four buildings, the Gérard-Morisset Pavilion, the Charles Baillairgé Pavilion, the Pierre Lassonde Pavilion, and the Central Pavilion/Grand Hall. A tunnel network connects the pavilions.

The Gérard-Morisset Pavilion was the first building built for the museum. Work on the building began in May 1928 and was completed in early 1931. Wilfrid Lacroix designed the building in a Beaux-Arts style and Joseph-Émile Brunet sculpted the reliefs on the facade. The building was opened to the public in June 1933. The building features white marble, wide Victorian style steps, and carved ceilings. In 2018, the museum completed renovations of the Gérard-Morisset Pavilion, which saw the brightening of its viewing spaces, as well as harmonizing the structure with the rest of the museum complex. 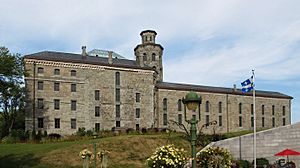 The Charles Baillairgé Pavilion is the second building that the museum occupied, although its age predates the other buildings in the museum complex. Charles Baillairgé designed the pavilion in 1867 for use as a prison. The design was modelled after the Auburn Correctional Facility, in Auburn, New York. The building housed inmates until 1970.

Shortly after acquiring the property, the museum underwent a two-year renovation beginning in 1989. The renovations led to the creation of four exhibition galleries within the pavilion, and a section of preserved jail cells to highlight the building's former use as a prison. Designs for the renovation were by Charles Dorval and Louis Fortin. Along with the building, Dorval and Fortin also designed the underground access that connected the Gérard Morisset pavilion with the Charles Baillairgé pavilion. In an effort to maintain the Battlefield Park, the design concealed a section of the new wing under the park's natural landscaping. The museum opened the pavilion to the public in May 1991.

The glass-facade pyramid, known as the Central Pavilion or Grand Hall, was built during the 1989–1991 renovations of the museum complex, and was also designed by Dorval and Fortin. The Central Pavilion lies in between the Gérard-Morisset Pavilion and the Charles Baillairgé Pavilion. It serves as the museum's visitor centre. 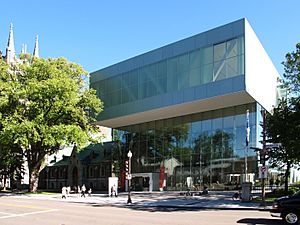 The Pierre Lassonde Pavilion in 2016, three years after its opening

Construction of the Pierre Lassonde Pavilion began in 2013, with the building opened to the public in June 2016. The pavilion has a glass-enclosed access point from Grande Allée to the rest of the museum complex further within Battlefield Park. The Office for Metropolitan Architecture designed the 14,900 square metres (160,000 sq ft) pavilion, with the lead partners being Jason Long and Shohei Shigematsu. During the construction of the building, renovations were also undertaken to the museum's tunnel system, transforming them into viewing spaces. The pavilion largely uses glass and steel for its building material, in an effort to foster transparency between the museum and the general public. The building is adjacent to Saint-Dominique Church.

The total cost of building the pavilion was approximately C$103.4 million. The pavilion features 2,741 square metres (29,500 sq ft) of gallery space; and also includes a café in its main lobby, a courtyard adjacent to the lobby, a white spiral staircase, and a gold-coloured elevator. The building was named after Pierre Lassonde, a benefactor of the museum. The colouring of the gold elevator was chosen to reflect Lassonde's work with gold.

The museum also operates a library and archives that specializes in Quebec art. The library contains over 13,000 biographical files, in addition to catalogs, monographs, and audiovisual documents relating to art in Canada, and around the world. Access to the museums library and archives requires a scheduled appointment made with the museum. Fonds that have been computerized may be accessed from CUBIQ, the central catalogue for publicly operated libraries in Quebec.

All content from Kiddle encyclopedia articles (including the article images and facts) can be freely used under Attribution-ShareAlike license, unless stated otherwise. Cite this article:
Musée national des beaux-arts du Québec Facts for Kids. Kiddle Encyclopedia.