Charles Daudelin, GOQ RCA (October 1, 1920 – April 2, 2001) was a French Canadian pioneer in modern sculpture and painting. He worked in a wide variety of media, including painting, metal and ceramic sculpture, jewelry, and marionettes which he made with his wife, Louise.

Born in Granby, Quebec, he moved in 1939 to Montreal where he worked for the silversmith Gilles Beaugrand, a childhood friend of Paul-Émile Borduas. While still working for Beaugrand, he enrolled in evening classes at the École du meuble in Montreal, then attended full-time in 1941. He joined the Contemporary Arts Society in 1941. In May 1943, he and 22 other artists under the age of thirty, including several students of Borduas at the École du Meuble, took part in the Sagittarius exhibition at the Dominion Gallery, organized by Maurice Gagnon, professor at the École du Meuble, and which would constitute a milestone in the history of the Automatistes. Daudelin exhibited several works there, including sculptures. In September 1943 in Granby, Daudelin`s first solo exhibition took place, also organized by Maurice Gagnon.

Between 1944 and 1945, Daudelin made two visits to New York, where he visited the atelier of Fernand Léger. Between 1946 and 1948, he spent time in Paris, where he regularly saw Léger and met the sculptor Henri Laurens, who he would meet a number of times, and was afterwards influenced by Laurens` organic form. He taught at the École des beaux-arts in Montréal until 1967. He became a pioneer in integrating art into public space. He created many public artworks, including: 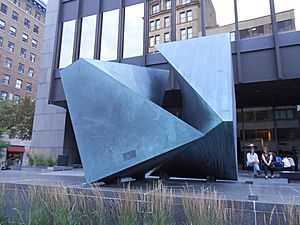 Charles Daudelin lived in [[Kirkland, Quebec[[, and died in nearby Pointe-Claire, Quebec. His last work, Le Passage du 2 avril, is named for the date of his death and installed in front of Kirkland City Hall.

All content from Kiddle encyclopedia articles (including the article images and facts) can be freely used under Attribution-ShareAlike license, unless stated otherwise. Cite this article:
Charles Daudelin Facts for Kids. Kiddle Encyclopedia.