Lewisham is an area in south-east London, England, in the London Borough of Lewisham, centred 5.9 miles (9.5 km) south-east of Charing Cross. The area is identified in the London Plan as one of 35 major centres in Greater London. As a major centre, Lewisham had a population of 95,041 in 2011. It is an important transport hub for South London, and is one of the borough's largest settlements. Lewisham has the largest Police Station in Europe which was moved to the Town Centre from Ladywell Road and rebuilt where the shopping centres department store once stood. There were plans to replace the department store to where the Riverdale Leisure Centre was based adjacent to Boots store when the Mayor was elected. 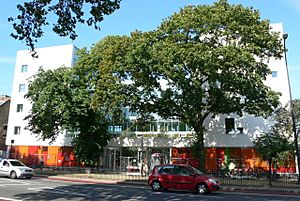 It is most likely to have been founded by a pagan Jute, Leof, who settled (by burning his boat) near St Mary's Church (Ladywell) where the ground was drier, in the 6th century. As to the etymology of the name, Daniel Lysons (1796) wrote:

"In the most ancient Saxon records this place is called Levesham, that is, the house among the meadows; leswe, læs, læse, or læsew, in the Saxon, signifies a meadow, and ham, a dwelling. A Latin legal record, dated 1440, mentions a place in Kent as Levesham which may refer to Lewisham. It is now written, as well in parochial and other records as in common usage, Lewisham."

"Leofshema" was an important settlement at the confluence of the rivers Quaggy (from Farnborough) and Ravensbourne (Caesar's Well, Keston), so the village expanded north into the wetter area as drainage techniques improved.

King Alfred was Lord of the Manor of Lewisham, as is celebrated by a plaque in Lewisham Library.

The Manor of Lewisham, with its appendages of Greenwich and Combe, was given by Elthruda, King Alfred's niece, to the abbey of St. Peter at Ghent, of which Lewisham then became a cell, or an alien priory. This grant is said to have been confirmed by King Edgar in 964, and by Edward the Confessor in 1044, with the addition of many privileges.

In the mid-17th century, the then vicar of Lewisham, Abraham Colfe, built a grammar school, a primary school and six almshouses for the inhabitants.

In the 17th century the Manor of Lewisham was purchased by George Legge, later Baron Dartmouth. His son William was raised by Queen Anne to several positions of honour and trust, and was a member of her privy council; and on 5 September 1711, was ennobled as Viscount Lewisham, and Earl of Dartmouth. His grandson George, Lord Dartmouth, obtained from King Charles II[he had been dead for ages] the privilege of holding a fair twice a year, and a market twice a week, upon Blackheath in the parish. The fair used to be held on 12 May and 11 October, but in 1772 it was discontinued, (except for the sale of cattle) by the Earl of Dartmouth, as lord of the manor.

The village of Lewisham had its nucleus in its southern part, around the parish church of St Mary, towards the present site of University Hospital Lewisham. The centre migrated north with the coming of the North Kent railway line to Dartford in 1849, encouraging commuter housing. The Official Illustrated Guide to South-Eastern and North and Mid-Kent Railways of June 1863, by George Measom, describes Lewisham as follows: 'Lewisham Station, situated on the slope of an eminence admist picturesque scenery, beautiful green meadows rising abruptly to the summit of the hill on the left, dotted with handsome residences and gardens, while the Common is seen intersected by various cross roads and studded with country inns and houses on the low ground or valley to the right. The area of the parish is 5,789 acres... Lord of the manor, the Earl of Dartmouth to whom it gives the title Viscount'.

Lewisham was administratively part of Kent until 1889, and then formed part of the Metropolitan Borough of Lewisham in the County of London until 1965.

The town centre was hit by a V-1 flying bomb in 1944: there were over 300 casualties including 51 fatalities, and it devastated the high street, which was fully restored by the mid-1950s. This horrific event is commemorated by a plaque outside the Lewisham Shopping Centre (opened in 1977). The plaque was on the pavement outside the Marks and Spencers store in the main shopping precinct. However, suffering wear and tear, the local authority arranged for it to be mounted to the façade. In 1955 Sainsbury's opened a store in Lewisham which was reported to be Europe's largest self-service supermarket, with 7,500 square[feet?] of retail space, although the one now incorporated in the 1977 shopping centre is much smaller. The area at the north end of the High Street was pedestrianised in 1994. It is home to a daily street market and a local landmark, the clock tower, completed in 1900 to commemorate Queen Victoria's Diamond Jubilee in 1897. The police station, opened in 2004 to replace the station in Ladywell, is officially the largest in Europe.

Lewisham Cricket Club was one of the most prestigious London sides during the Victorian era. From 1864 they played at Lewisham Cricket Ground, which lay north of Ladywell Road, until its closure later in the 19th century. Lewisham Swimming Club was also very successful, with several of its members representing England at water polo and other gymkhana events. During the First World War, Lewisham Hospital's infirmary became the Lewisham Military Hospital, and during the Second World War the hospital was hit by a V-1 flying bomb, which destroyed two wards, injured 70 people and killed one nurse.

Lewisham is also the site of one of the worst disasters on British Railways in the 20th century. On 4 December 1957 a crowded steam-hauled passenger express headed for the Kent coast overran signals at danger in thick fog near St. John's station and crashed into a stationary electric train for the Hayes branch line. The force of the impact brought down an overhead railway bridge onto the wreckage below. An electric multiple unit about to cross the bridge towards Nunhead managed to pull up in time. 90 passengers and crew died in the accident.

In 1977, the Battle of Lewisham (actually in New Cross) saw the biggest street battle against fascists since the Battle of Cable Street in 1936. Over 10,000 people turned out to oppose a National Front march which was organised on the back of increasing electoral success at that time.

The Docklands Light Railway was extended to Lewisham in 1999. 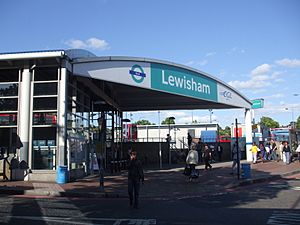 All trains are operated by Southeastern. They serve London Victoria, London Charing Cross and London Cannon Street both via London Bridge and via Sidcup, also Orpington and Hayes, Dartford via Bexleyheath, and Gillingham via Woolwich Arsenal.

The Docklands Light Railway has services to Canary Wharf, Bank and Stratford. 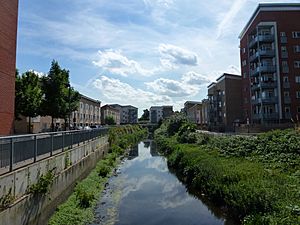 There is a skyscraper adjacent to the shopping centre which used to be owned by Citibank until they moved to the Docklands which may be converted to residential.

There are three major development sites on Loampit Vale:

Almost all of the SE13 postcode district, which is associated with Lewisham, Ladywell and Hither Green, is within the London Borough of Lewisham, except for the Coldbath Estate and part of the Orchard Estate along Lewisham Road, which are covered by the Royal Borough of Greenwich.

All content from Kiddle encyclopedia articles (including the article images and facts) can be freely used under Attribution-ShareAlike license, unless stated otherwise. Cite this article:
Lewisham Facts for Kids. Kiddle Encyclopedia.