Bexleyheath is a town in the London Borough of Bexley, southeast London, England, approximately 12 miles (19.3 km) east-southeast of Charing Cross. The town is identified in the London Plan as one of 35 major centres in Greater London. 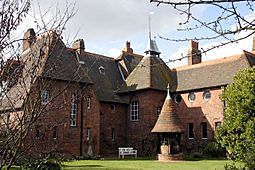 Until the early 19th century, Bexley Heath comprised an area of scrub-land with few buildings, although Bexley Heath windmill stood at the corner of what is today Erith Road and Mayplace Road. The heath bordered Watling Street. In 1766 Sir John Boyd had Danson House built in parkland (now Danson Park between Bexleyheath and Welling). In 1814 the land to the north of Bexley that would become Bexleyheath became subject to an Enclosure Act. In 1859 architect Philip Webb designed Red House for the artist, reforming designer and socialist William Morris on the western edge of the heath, in the hamlet of Upton—before Upton became largely developed as a London suburb. The National Trust acquired the house in 2003. Morris wanted to have a "Palace of Art" in which he and his friends could enjoy producing works of art. The house is of red brick with a steep tiled roof and an emphasis on natural materials. Red House is in a non-historical, brick-and-tile domestic style. It is now a Grade I listed building. Morris lived with his wife Jane in the house for five years, during which time their two daughters, Jenny and May, were born. Forced to sell the house for financial reasons in 1865, Morris vowed never to return to it—he said that to see the house again would be more than he could bear.

Bexleyheath's parish church, Christ Church, dates from 1841; and the parish of Bexleyheath from 1866; the building of the current church finished in 1877. Alfred Bean, railway-engineer and one-time owner of Danson House, furthered the development of Bexleyheath as a London suburb by championing the Bexleyheath Line in the 1880s to support the growth of estates around Danson Park. The clock-tower at the centre of the modern shopping area, built in 1912, commemorates the coronation of King George V. In the late 1970s the London Borough of Bexley built its headquarters, the Civic Offices, in Bexleyheath.

Bexleyheath forms part of the historic county of Kent; and since 1965 with the creation of the Greater London Council under the London Government Act 1963 it has also formed part of the London Borough of Bexley. It is generally seen as being split into two parts by the old Roman road. The DA6 postcode area which is south Bexleyheath has a less homogeneous feel and features Danson House and the Red House. Adjacent to the park, Danson Road has an array of large houses, including a small number of Modernist buildings. In the north DA7 postcode area the majority of houses are predominantly 1930s semi-detached residences, apart from bungalows situated close to the railway station. This area includes part of the Bostall Park Estate, built by the developers Feakes & Richards.

The modern town area is dominated by The Broadway Shopping Centre, a covered shopping centre opened in 1984, and an Asda supermarket (opened 1987), similar to facilities in other suburban towns and post-war 'New Towns'. A face-lift in 2008 on "The Mall" gave the centre a more modern internal appearance; externally it was largely unchanged. Other developments included the building of "Bexleyheath Square" in the early 2000s as an extension to the then "Broadway", providing more retail units. The 1990s saw the pedestrianisation of the road adjacent to "The Broadway" shopping centre (also known as the Broadway) following the construction of two minor bypasses (Arnsburg Way and Albion Way). Many of the changes to the town centre since 2000 have been in some way a response to competition from Bluewater Shopping Centre, 9 miles to the east in Greenhithe, Kent. Management was taken over in 2010 by Broadway Shopping Centre.

The statue outside the Broadway Centre is "Family Outing" by local artist John Ravera; it was commissioned by Norwich Union and unveiled in 1985. The sculpture, of two parents playing with their son, is based on a Mr G Brazier of Bexley, and was created at a cost of £10,000.

In May 2009 a major redevelopment scheme was approved by the local council following public consultation. This involved the redevelopment of sites occupied by the Bexley council buildings. The magistrates' court was to move to a new building on a site occupied by the library, which would be incorporated into the new development alongside 300 new homes. However, this development did not proceed following the sale of the Broadway Shopping Centre to new owners.

In 2012, the local council approved plans to relocate its offices into the former headquarters of The Woolwich, which had lain empty since 2006. The existing civic offices were going to become a Tesco supermarket; (previously Tesco had acquired the Woolwich HQ site).

Bexleyheath has drawn a lot of custom to match the expansion in retail space from residents of towns in the borough, particularly from Erith and Thamesmead which have expanded in size with development along the River Thames. Custom is also drawn from Plumstead and Woolwich (in the neighbouring borough of Greenwich). The residents of these areas include a large West African community, predominantly Ghanaian and Nigerian.

Bexleyheath and Belvedere Hockey Club are based in Welling, but play some home matches at Erith School.

Cultural events include regular concerts by the Sidcup Symphony Orchestra held in the hall of Townley Grammar School, while the Edward Alderton Theatre produces a number of non-professional productions each year. The theatre, which was founded in 1976, has a raked auditorium seating 74 and a proscenium stage. 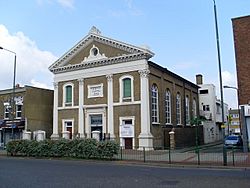 The town is served by Bexleyheath railway station, situated a couple of hundred metres to the north of the Broadway on Station Road. The station is on the Bexleyheath Line, the middle of three lines connecting London and Dartford. Rail services connect the station to London Victoria via Peckham Rye, London Charing Cross, London Cannon Street, Barnehurst, Gravesend and Dartford.

All content from Kiddle encyclopedia articles (including the article images and facts) can be freely used under Attribution-ShareAlike license, unless stated otherwise. Cite this article:
Bexleyheath Facts for Kids. Kiddle Encyclopedia.