Kids Encyclopedia Facts
This page is about the district in London. For other uses, see Welling (disambiguation).

Welling is an area of South East London, England, within the London Borough of Bexley and the boundaries of the historic county of Kent. It is 1.5 miles (2.4 km) west of Bexleyheath, 4 miles (6.4 km) south east of Woolwich and 10.5 miles (16.9 km) east-southeast of Charing Cross, the traditional centre of London.

The East Wickham part of Welling is probably one of the oldest settlements in this area. A Neolithic stone axe was found in East Wickham in 1910, and remains of Roman buildings were unearthed near Danson in 1989.

Before opening of the Bexleyheath Line on 1 May 1895, Welling was a village on the main road from London into Kent (Watling Street). It had been a traditional staging post for coaches; the presence of three inns along the main road is the result of that.

After World War I, Bexley Urban District Council built over 400 houses north of the railway. Later, when the Danson estate was sold to developers, the land to the south was opened up to suburban sprawl and the settlement incorporated the local parishes of St Michael's East Wickham and St Johns Welling

The area was part of the Municipal Borough of Bexley in the administrative county of Kent until, in 1965, the borough was abolished under the London Government Act 1963 and its area transferred to Greater London to form part of the present-day London Borough of Bexley.

For five years after 1990, the headquarters of the far-right British National Party (formed in 1982) were based in Welling. Bexley Council shut down the BNP Headquarters in 1995.

Local legend has it that Welling is so called because in the era of horse-drawn vehicles, it could be said you were "well in" to Kent, or had a "well end" to the journey up and down Shooters Hill which, at the time was steep, had a poor road surface and was a notorious haunt of highwaymen. Until the 1800s, most of Welling down to Blackfen was covered in woodland which offered excellent concealment for outlaws and robbers who would prey on vulnerable slow-moving horse-drawn traffic.

However, local historians have recently concluded that the origin of the name is most likely from 'Welwyn' (meaning 'place of the spring'), due to the existence of an underground spring located at Welling Corner, or possibly a manorial reference to the Willing family, who lived in the area in 1301.

Welling is home of the football ground of Welling United F.C. which is shared with the Erith and Belvedere F.C., 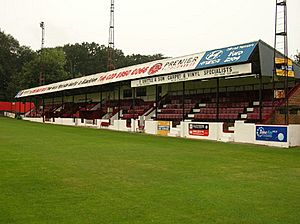 The high street hosts a Tesco Superstore. The Co-op Superstore opposite (formerly operated by the Royal Arsenal Co-operative Society) ceased trading on 19 September 2008 and was redeveloped as a Morrison's supermarket that opened on 16 November 2009.

The former Foster's School building in Upper Wickham Lane is a local landmark. The school relocated to Westbrooke Road in Welling and its original site was converted to residential use (retaining the old Grade II listed main school building and headmaster's house). Further north of the original site is an ancient church, now used by a Greek Orthodox congregation. 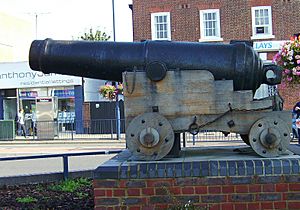 A large Russian gun is located at Welling corner. This Russian weapon is a 36-pounder carronade (calibre 6.75 inches - weight 17 cwt) of a type used during the Crimean War (1854 to 1860), displayed on a simple wooden replica carriage. The carronade was in service from 1780 to 1860 and is now on loan from the Royal Artillery Museum in Woolwich as a reminder of Welling's early association with the Royal Arsenal, Woolwich, when huts at East Wickham were built as homes for munitions workers in the Great War.

In 1992 a group of local people, led by local Councillor Nigel Betts, revived the old Memorial Hall Trust which was set up in 1921. In 1995 it started operation as a local grant giving charity called the East Wickham & Welling War Memorial Trust[1] using the revenue from the old hall to fund grants in the area. Its main aim is remember the men of the district who were killed in World War One so a new War Memorial was built in 1996. Its charitable aim is to help local groups with rents on their meeting places or to help groups maintain their halls. Other grants help young people with adventurous activities and there is an annual academic bursary. In 2006 it gave grants totaling £47,000. As part of a re-investment programme, the Trust sold the Hall for an housing re-development in 2007.

A major upgrade of paving and street lighting was completed in the autumn of 2005. The retention or removal of a section of westbound bus lane from Welling High Street became one of the few specific local issues on which the main political parties disagreed in the approach to the local Bexley Council elections held on 4 May 2006. The incoming Conservative administration immediately revoked the bus lane.

The MECCA bingo hall in Upper Wickham Lane has ceased trading, apparently one of nine in England unsuited to operate after the national ban on smoking in public places. This large building, which originally was an Odeon cinema is operating now as Freedom Centre International, a Pentecostal Church.

Rosebys, the Co-op and Tesco old store all closed since 2007, as has the pub near Welling railway station (formerly the Station Hotel) lately known as "Inferno's" - which has become a Tesco Express.

Live music is performed occasionally at the Avenida restaurant and at The Glenmore Arms public house.

The "Old Koffi Pot" café, dating from the 1930s was until the early 1990s known as 'Ferrara's'. The venue was well-known locally for its ice cream and enjoyed its heyday at the height of the 1960s cafe culture, when young people from Kent and South East London would call in for refreshments on the way to or from dancing at the Embassy Ballroom (since demolished to make way for the building of Embassy Court). The "Old Koffi Pot" closed in 2009 for 'economic reasons', but a modern coffee shop has since opened in its place retaining the name "The Koffi Shop" but a brand new black frontage and interior decor have removed any historical link with the original establishment.

In March 2013 the first Micropub in Greater London opened in the High Street in a converted electrical shop - "The Door Hinge". It sells real ale by gravity stillage dispense and cider and wine only. It won CAMRA Bexley Branch Pub of the Year for 2014.

All content from Kiddle encyclopedia articles (including the article images and facts) can be freely used under Attribution-ShareAlike license, unless stated otherwise. Cite this article:
Welling Facts for Kids. Kiddle Encyclopedia.