Erith is a town next to the River Thames, in the London Borough of Bexley, south-east London, and the historic county of Kent, north-east of Bexleyheath and north-west of Dartford. Erith town centre has undergone modernisation and an increase in dwellings since 1961. The curved riverside high street contains three listed buildings, including the Church of England church and the Carnegie Building, while the district otherwise consists primarily of suburban homes. Erith is linked to central London and Kent by rail and a dual carriageway. It has the longest pier in London, and retains a coastal environment with salt marshes as well as industrial land. 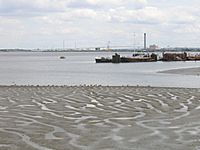 Mudflats on the Thames, with the Queen Elizabeth II Bridge in the far background

Work carried out at the former British Gypsum site in Church Manorway by the Museum of London Archaeological Service shows that the area was covered by a dense forest of oak, yew, and alder during the Neolithic Period, which by the Bronze Age had given way in part to sedge fen.

The museum's work at the former site of Erith School in Belmont Road revealed traces of prehistoric settlement, and of a substantial community or farmstead in the first century AD.

Following the collapse of Roman rule at the beginning of the 5th century, Britain was colonised by Anglo-Saxon invaders from northern Europe. The Anglo-Saxon Chronicle records that they won the Battle of Crecganford (thought to be modern Crayford) in 457 and shortly after claimed the whole of Kent. Their different way of life was reflected in their pattern of settlement. The town and country estates of the Roman bureaucrats gave way to a network of villages, occupied by warriors and farmers. Erith was one such village and has a Saxon name, originally Ærre hyðe meaning "old haven".

There was probably a church on the site of the present St John the Baptist's during the Anglo-Saxon period. The early settlement was based around it, meaning that the centre of Erith was once west of its current location.

The earliest reference to the area is in a Latin charter of 695 recording a grant by the Bishop of the East Saxons of certain lands at Erith. The surrounding area was known as Lesnes or Lessness, which is mentioned in the Domesday Survey. After the Norman Conquest, Lessness passed into the possession of Bishop Odo. In 1315, a Royal Charter was granted for a market to be held in Erith every Thursday. However, it was noted in 1776 that the market had long been discontinued.

Erith owes its existence to the Thames and was, until the 1850s, essentially a small riverside port, given prominence by King Henry VIII's decision to open a naval dockyard there, approximately where the Riverside Gardens are now. Henry's famous warship, Henri Grâce à Dieu, was fitted out there in 1515. Up until the 19th century Erith remained a popular anchorage. Ships often discharged some cargo there to reduce their displacement before entering the shallows upstream.

In 1797 Edward Hasted described Erith as "consisting of one small street of houses, which leads to the water side," and mentions two annual fairs, at Ascension and Michaelmas. In 1831 Erith's population was 1533 – it was described in 1840 as being "composed chiefly of two streets, one leading down to the water side, the other branching off to the left towards the church." 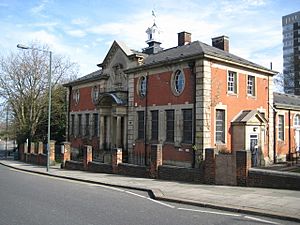 By 1849 Erith was enjoying a short spell as a riverside resort. Its pier and nearby hotel gave hospitality for day-trippers arriving on Thames pleasure boats or by railway.

The Local Government Act 1894 brought into existence Erith Urban District, which became the Municipal Borough of Erith in 1938. It included Northumberland Heath and Belvedere.

Erith Iron Works was established in 1864 in Anchor Bay by William Anderson.

From 1881 Erith was home to a large cable works founded by William Callender. This became British Insulated Callender's Cables (BICC), and eventually Pirelli, which announced its partial closure in 2003. The remainder became Prysmian.

Engineering became an important industry around Erith, with armaments and cables being the main products. Vickers was a major employer and was linked to the Royal Arsenal at nearby Woolwich. Another local firm was Callender's Cables). 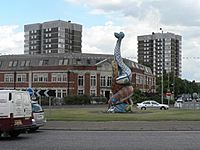 A 'dancing fish' statue at the roundabout in the town centre

During the First World War Erith was an important area for the manufacture of guns and ammunition, largely due to the presence of the large Vickers works.

The town suffered heavy bomb damage in the Second World War, mainly due its position on the riverside near the Royal Arsenal. The bomb damage and a gradual decline in local trade prompted major redevelopment in the 1960s.

In 1961, plans were put forward to redevelop Erith into a modern, sleek shopping and working environment. This involved clearing the sub-standard housing by the riverside and altering the street layout. Some of the buildings erected, particularly the social housing tower blocks, are of a brutalist form that typified the overspill estates put up by almost all councils in England's major cities as an affordable way of clearing the slums.

In 1965, under the London Government Act 1963, Erith became part of the London Borough of Bexley. 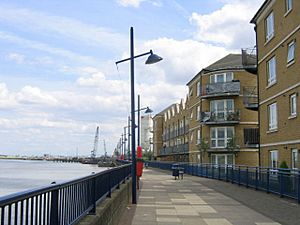 Since the late 1990s Erith has been undergoing significant changes, with the Erith Western Thames Gateway project being the culmination.

The regeneration falls within the remit of the Thames Gateway project, with Erith as a key focus for Bexley Council, as its only population centre on the River Thames.

Since 2000 a significant number of new flats have been constructed by the river by private companies. The Erith Western Gateway will include a significant number of new riverside flats, and is expected to continue the regeneration of the area, hitherto a large underused area of the town centre. Bexley Council is seeking to produce a mixed-use development with a potential of 6,000 sq.m of new commercial space and over 500 new homes.

62% of the population is White British, according to the 2011 census. The second most common ethnicity is Black African, at 14%. 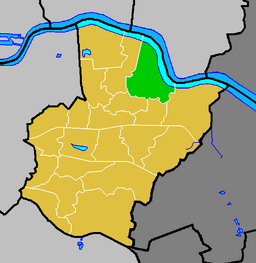 Erith ward (green) within the London Borough of Bexley (yellow)

Most of Erith lies within the Erith and Thamesmead constituency. The current Member of Parliament is Teresa Pearce (Labour). The eastern part of Erith is within the Bexleyheath and Crayford constituency, whose MP is David Evennett (Conservative).

Erith Leisure Centre, including swimming facilities, was opened in 2005.

The David Ives Stadium is next to the Leisure Centre. It is often called Erith Stadium and is home to Bexley Athletic Club.

The Erith Playhouse Theatre is the largest in Bexley.

Erith has a Health Centre and a library with a meeting room. 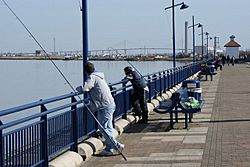 Erith is the location of the longest pier in Greater London. The pier has recently been adapted from commercial to leisure use, and is popular with anglers.

The annual Erith Riverside Festival has been held for a number of years in Riverside Gardens alongside the Thames. Erith is the starting point for the LOOP (London Outer Orbital Path) and one of the starting points for the Green Chain Walk. The Thames Path National Trail, which runs to the source of the River Thames at Kemble, begins at nearby Crayford Ness.

Erith Rowing Club is located on the Erith waterfront. Erith Yacht Club is based a short distance downstream from Erith on the edge of Crayford Marshes.

There are two senior football clubs named for Erith, neither of which are actually based in the town. Erith & Belvedere play at Park View Road in Welling, and Erith Town play at Oakwood in Crayford. 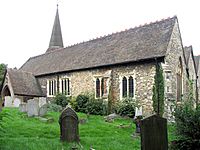 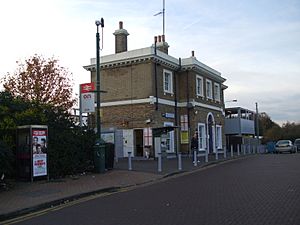 The A2016 road bisecting Erith, is a dual carriageway stretching across the Erith Marshes.

All content from Kiddle encyclopedia articles (including the article images and facts) can be freely used under Attribution-ShareAlike license, unless stated otherwise. Cite this article:
Erith Facts for Kids. Kiddle Encyclopedia.