Kids Encyclopedia Facts
Not to be confused with Crawford (disambiguation).

Crayford is a town and electoral ward in south-east London, England within the London Borough of Bexley. It lies east of Bexleyheath and north west of Dartford.

Lion remains from Crayford; dated to the Palaeolithic

An Iron Age settlement existed in the vicinity of the present St Paulinus Church between the Julian and Claudian invasions of Britain, from roughly 30 BC to AD 40. Roman ruins have been discovered and Crayford is one of several places proposed as the site of Noviomagus, a place mentioned in the Antonine Itinerary as being on the Roman equivalent of the later Watling Street. Crayford is also plausible as the site of the bloody battle of Crecganford ("Creeksford") in 457. The Anglo-Saxon Chronicle written around 400 years later describes how Hengist and Aesc defeated the "Brettas" at the site.

Crayford is mentioned in the Domesday Book, which was compiled just prior to 1086, as a settlement within the Hundred of Litlelee with a church, three mills, and a relatively large population of 27 regular householders (villeins) and 2 smallholders. Its overlord was not a private individual or the king but Christ Church, Canterbury.

As a (civil/combined) parish (before 1920) it included the hamlets of Northend, Perry Street and Slade Green which lie to the north. In 1831, the population of the parish was 2022 people. For centuries it was strongly associated with brick-making, the printing of silk scarves, ties and calico cloths, and for a short period carpet-making. 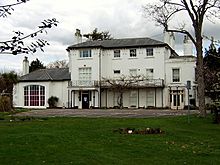 There were two main Manor Houses in the area during the Middle Ages, Newbery Manor on the site of what is now Crayford Manor House, and Howbury Manor next to Slade Green. Roger Apylton had served Kings Henry V and Henry VI as auditor, and resided at Marshalls Court, Crayford. Late in the reign of Elizabeth I Henry Partich sold Newbery Manor to Henry Apylton of Marshalls Court, and Apylton built May Place close by. Hall Place, which lies alongside the River Cray, was built for Lord Mayor of the City of London Sir John Champneis in around 1537. There was also an Iron Mill, which was later replaced by a saw mill (in 1765), which produced the timber for the floor of Buckingham Palace. In 1551 Francis Goldsmith bought a 'Great tenement called The Place' next to the bridge in Crayford, and between 1556 and 1586 purchased substantial amounts of local farmland and the Old Bell Public House.

In 1623 most of the parish of Crayford was purchased by Merchant Taylor Robert Draper including Newbery Manor, Howbury Manor, Marshalls Court and May Place, where his family took up residence. Draper's wife Anne was the daughter of Thomas Harman who lived at Ellam House which subsequently passed to the Drapers. The ownerships subsequently passed to Robert Draper's son William, who was selected to be the Sheriff of the County of Kent but died in 1650 before taking office, and then to Robert's grandson, parliamentarian Cresheld Draper. On the death of Cresheld Draper in 1694, his heirs sold all the properties to Sir Cloudesley Shovell'.

Crayford Manor House was rebuilt in the eighteenth century, at the time essentially a farmhouse until it was remodelled in 1816 for the The Rev. Thomas Barne. Historic England state it was built piecemeal over several periods, with a porch and Italianate features being added to the 1816 building.

Other notable 19th-century local houses included Shenstone (built around 1828 and demolished 1974, the site is now Shenstone School, with Shenstone's former grounds now being Shenstone Park), Stoneyhurst (which became Stoneyhurst Convent High School and is now the site of St Catherine's Roman Catholic School for Girls), Martens Grove and Oakwood - the latter two designed by architect John Shaw, Jr. and built by George Locke of builders Locke & Nesham with each occupying one of the houses.

In 1819 the former saw mill site became a flour mill, and another major employer was the silk works set up by Augustus Applegath and later run by David Evans. The Maxim Nordenfeldt Gun and Ammunition Factory was also a major employer, until taken over by the Vickers Company in 1897. Vickers built military aeroplanes and armaments and became the dominant employer, building homes, a theatre and a canteen close to many workshops. The canteen (built during the First World War) became the town hall of the Crayford Urban District Council and remains a major landmark in municipal use.

Until the creation of Greater London in 1965 which was effectively an expansion of the County of London, the character and attributes of the place fell just short of town status in the United Kingdom and it was until shortly before the Second World War little more than an average sized village in Kent with relatively short journeys possible to London and 19th century and early 20th century industrial employment areas such as Dartford and Croydon.

Another former major employer in Crayford was Dussek Brothers (part of Burmah-Castrol since the 1960s) who operated their oils and waxes blending business on Thames Road from around 1928 until the site was bought by BP and subsequently closed down in 2001. The entire site was demolished in early 2010, and is awaiting a buyer. The David Evans silk works is another recent closure, in 2002. 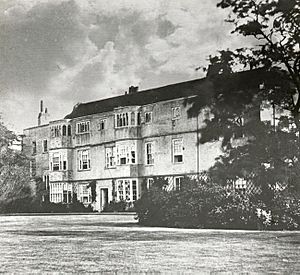 1887 photograph of May Place

Noteworthy residents include Thomas Harman, author of a work about vagabonds and rogues in 1566, who resided in Crayford from 1547; William Claiborne from Crayford, who from 1621 was the surveyor of Jamestown in the Virginia Colony and in 1631 established the first permanent European settlement in Maryland, on Kent Island where his own residence was called Fort Crayford and then establishing New Kent County, Virginia in 1654; Admiral Sir Cloudesley Shovell, who lived at May Place between 1694 and 1707, and Sir Frederick Currie who also lived at the Manor House, May Place.

Lieutenant-General Thomas Desaguliers FRS (1721–1780), British Army general and a Colonel Commandant of the Royal Artillery, is buried in Crayford with his wife Mary (née Blackwood), a granddaughter of Admiral Sir Cloudesley Shovell.

Inventors Augustus Applegath (who built Shenstone House), Sir Hiram Maxim (who moved his works to Crayford in 1884 and lived in Stoneyhurst from then until 1889) and Jack Wall, inventor of the Crayford focuser, which is incorporated into many modern telescopes were also residents.

George Locke who lived in Crayford was (with his partner Thomas Nesham) the builder of prisons, churches (including All Saints Belvedere) and various other buildings in the mid-nineteenth century such as the Royal Naval School at New Cross (now part of Goldsmiths College), the Great Western Railway's Engine House at Kensal New Town and Littlehampton Fort. Some of their works were designed by John Shaw, Jr. They also undertook public works such as the South Lambeth Waterworks and the Southwick Ship Canal.

Ghost story writer, journalist and broadcaster Algernon Blackwood lived in Crayford Manor House between 1871 and 1880 as a child, and the house features in his work 'A Prisoner in Fairyland' as 'Crayfield Manor House'.

According to the 2011 census, 84% of the population is White British. 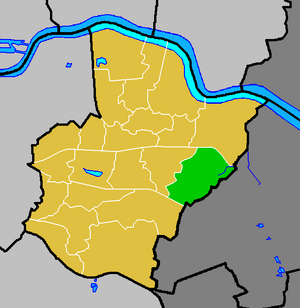 Crayford ward (green) within the London Borough of Bexley (yellow)

Crayford is now well known for a different theatre (home of the New Theatre Group) and a greyhound racing track. The theatre was named in honour of Geoffrey Whitworth who played a key part in developing a British tradition of amateur drama and in building political support for The Royal National Theatre erected at Waterloo after his death. The new Crayford Community Centre, located above the library, is the venue for many groups.

Nearby Hall Place is a scheduled ancient monument lying between Crayford and Bexley. It has gardens with the River Cray running through and a plant nursery, a cafe and restaurant plus the silkworks shop formerly located in the David Evans factory.

Leisure facilities include "The Bear and Ragged Staff" public house well known as a venue for live pop/rock bands, and Crayford Stadium is one of the three remaining greyhound racing stadia in London, besides Romford Stadium and Wimbledon Stadium.

There are six other pubs in the town centre - 'The Charlotte' in Station Road,'The Duke of Wellington' on London Road, 'The Crayford Arms', 'The Duke's Head' and 'The One Bell' (which footballer Jimmy Bullard bought for his father in 2009), each on or adjoining Crayford High Street, and the latest venue - a micro-pub - The Penny Farthing, on Waterside.

The large Sainsbury's supermarket situated next to stadium was claimed by Sainsburys to be the world first's use of technology which heats the store using natural energy captured through boreholes buried hundreds of metres beneath the ground and was at the time of its expansion (2010) the largest Sainsbury's in England.

The High Street is partly one-way for motor traffic and has a few shops and services including a Mace/sub-Post Office, doctors' surgery (now located in the revamped Town Hall), nail bar, golf store, Iceland, florists, takeaway shops, several betting shops and hair salons. The new Crayford Island Retail Park will open in 2016 in the centre of the one way system, with the largest store being an Aldi supermarket.

On its way from Erith to Old Bexley, the "London LOOP" walk follows the River Cray across the Crayford Marshes and through the town centre. This section of the LOOP is based on an earlier signed walk, the Cray Riverway, and many of the signposts along it still carry the older route's name.

All content from Kiddle encyclopedia articles (including the article images and facts) can be freely used under Attribution-ShareAlike license, unless stated otherwise. Cite this article:
Crayford Facts for Kids. Kiddle Encyclopedia.