The name is thought to be derived from Cetecopp meaning "seat shaped or flat topped hill"; it had its earliest recorded use in 1254. The population of Sidcup, including its neighbourhoods Foots Cray, North Cray, Albany Park, Longlands, Ruxley, Blackfen and Lamorbey, was 43,109 in 2011. 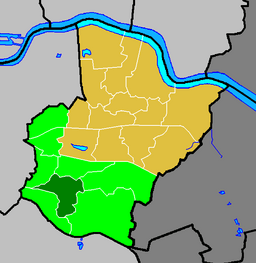 Sidcup originated as a tiny hamlet on the road from London to Maidstone. According to Edward Hasted, "Thomas de Sedcopp was owner of this estate in the 35th year of king Henry VI. [i.e. in the 1450s] as appears by his deed." Hasted described Sidcup in the latter part of the 18th century as "a small street of houses, among which is an inn of much resort", referring to the former Black Horse pub on the high street.

A number of manor houses, converted to other uses, remain. They include Frognal House, the birthplace and residence of Thomas Townshend, 1st Viscount Sydney, after whom Sydney, Australia was named (now converted for use as residential and nursing accommodation), Lamorbey House (now used by Rose Bruford College), Sidcup Place (now a Brewers Fayre bar and restaurant) and "The Hollies" (now converted for residential use).

Sidcup has a mixture of large Victorian and Edwardian properties alongside typical 1930s suburbia. It retains many parks and open spaces hinting at the great estates and large homes which once stood in the area.

The town contains Queen Mary's Hospital, a large Leisure Centre, four colleges and three secondary schools. Sidcup High Street is the local High Street, while there are some shops and local businesses on the adjacent Station Road. Sidcup High Street was recently the subject of a £1.8 million regeneration scheme In Store For Sidcup paid for by London Borough of Bexley.

Most of the district is within the London Borough of Bexley, however several parts in the North are under the governance of the Royal Borough of Greenwich, including Southspring, Greenhithe Close, Halfway Street (offsite Avery Hill), Radfield Way, Croyde Close and Overmead.

In 2011 The total population was recorded as 10,844. Many residents are aged 65+ or 85+, in line with the whole of London Borough of Bexley. At the census of 2011, the non-white population of Sidcup was recorded at 10.1%; the largest minority group were Asian or Asian British (5.4% of the total population), with White Other totalling 4.8% of the total population. The number of single parent families was higher in the district in comparison to the rest of the London Borough of Bexley. 63.8% reported Christianity as their religious beliefs which was above the borough average. However, these figures do not include the Blackfen and Lamorbey wards within the district.

Live music venues include the Charcoal Burner and The Iron Horse public houses, although the larger premises at the Beaverwood Club, Chislehurst, draw a significant audience from this area.

Sidcup is home to the Rose Bruford College of drama and Bird College, both of which have many well known and famous alumni and there are regular large-scale concerts given by Sidcup Symphony Orchestra, which also serves the wider South East London area.

Sidcup, along with most other suburbs in south east London, is not served by the London underground. Sidcup station opened in October 1866 shortly after the opening of the Dartford Loop Line. The station was built 1 mile (1.6 km) north of Sidcup town centre in the parish of Lamorbey. Sidcup station serves the area with services to London Charing Cross, London Cannon Street as part of a loop service operating via both Lewisham and Woolwich Arsenal, and a service to Gravesend. Fast trains take as little as 20 minutes to get to London Charing Cross.

Sidcup High Street is on the A211, following in length the old London - Maidstone - Hythe road. The A211 starts just after Eltham High Street, in the middle running along the A20 Sidcup By-pass before ending at Foots Cray, where the B2173 continues along the former A20 road. The A211 connects the two main roads in this district; Station Road and Main Road.

East Rochester Way on the A2 road runs partly through the district, adjoining Blackfen Road. The road provides useful links to the Blackwall Tunnel and Kent.

Provision for cyclists is generally poor within the district.

Sidcup is served by a number of Transport for London bus routes.

For education in Sidcup, see London Borough of Bexley § Education.

All content from Kiddle encyclopedia articles (including the article images and facts) can be freely used under Attribution-ShareAlike license, unless stated otherwise. Cite this article:
Sidcup Facts for Kids. Kiddle Encyclopedia.