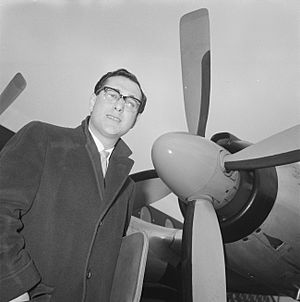 Harold Pinter CH CBE (10 October 1930 – 24 December 2008) was a British playwright, screenwriter, director and actor. Pinter was Jewish. He was born and raised in Hackney, east London.

His plays include: The Birthday Party, The Homecoming and Betrayal, all of which he adapted into movies. His adaptations of others' works include: The Servant, The Go-Between, The French Lieutenant's Woman, The Trial and Sleuth.

The critic Irving Wardle called Pinter's early plays "comedies of menace". He meant that the plays begin with an apparently innocent situation. The situation becomes both threatening and "absurd" as Pinter's characters behave in strange ways. Pinter acknowledged that Samuel Beckett influenced his early work. They became friends, sending each other drafts of their works in progress for comments.

Pinter was married to Vivien Merchant from 1956 until they divorced in 1980. He was married to Antonia Fraser from 1980 until his death. He was diagnosed with oesophageal cancer in 2001 and died from the disease in London seven years later when it metastasised to his liver.

All content from Kiddle encyclopedia articles (including the article images and facts) can be freely used under Attribution-ShareAlike license, unless stated otherwise. Cite this article:
Harold Pinter Facts for Kids. Kiddle Encyclopedia.